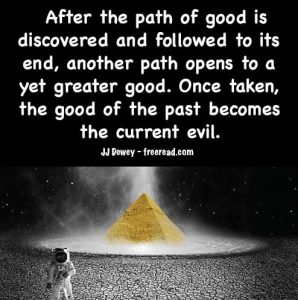 As most spiritual students know, all creation is formed and then governed by the seven rays. These rays go in and out of incarnation and wax and wane in influence. Right now we have two very different rays exerting influence. The first is Ray Six, which has been a dominating factor for the Age of Pisces over the past two thousand years. This is called the Ray of Idealism and strongly influences the emotional nature to support an ideal and sacrifice what is necessary to manifest it. Pisces is a water sign, which enhances the power of emotion during its dominance.

The positive manifestation of this ray occurred after the appearance of the Christ resulting with the presentation of the ideal man and of the path of love and sacrifice. Many embraced this and sacrificed their lives to establish ideals in the minds of humanity.

Later, this led to excess as wars were fought and persecutions were permitted in the name of Christ to force the supposedly correct views on the masses, and then extended to the Native Americans through the Conquistadors.

The influence went from helping establish the benevolent ideals of the loving Christ to being an agent of the beast in using excess unjust authority to enforce a corrupt ideal of the real thing.

Fortunately, Ray Six has run its course and is going out of incarnation as the Aquarian Age with different dominant influences is coming in. But it is not going out without a fight. Instead, it is reluctantly going out kicking and screaming. Those still under its influence want desperately to maintain powerful external emotional control over people’s lives. DK tells us there are still a large number of sixth ray souls in incarnation who will shortly be passing away which will greatly diminish the residual power of this ray of idealism.

The influences of the odd number rays are often in conflict with the even numbers, especially when one is increasing and the other decreasing in power as is now the case.

Society is thus faced with the masses who are still under the strong influence of the idealism and strong authority of Ray Six which is at odds with the incoming Aquarian influences of Ray Seven.

Ray Six started waning in 1625 AD and Ray Seven started making its influence felt in 1675. As we enter into the Age of Aquarius at the cusp of the two ages, these two rays have approached the time of maximum conflict.

So where is the conflict? As noted Ray Six is the ray of idealism. On the other hand, Ray Seven is called the Ray of Ceremonial Magic or Organization.

The magical part of the influence will increase humanity’s understanding of the Law of Correspondences so people will look for and understand the meaning of symbols and how things on one level correspond to other levels. The use of analogies and scientific ceremony will come to greater prominence.

The organization part governs business and law and order.

We thus see an emerging conflict between those who support impractical ideals at odds with business and law and order.

“A large number of seventh ray egos or souls and also of men and women with seventh ray personalities are coming into incarnation now, and to them is committed the task of organising the activities of the new era and of ending the old methods of life and the old crystallised attitudes to life, to death, to leisure and to the population.

“The result of the increasing flow of seventh ray energy plus the decreasing influence of the sixth ray which shows itself as a pronounced crystallisation of the standardised and accepted forms of belief, religious, social and philosophic is to throw the millions of people who do not respond to either of the above influences through egoic or personality relation, into a state of bewilderment. They feel entirely lost, are gripped by the idea that life holds for them no desirable future, all that they have learnt to cherish and to hold dear is rapidly failing.”

The Destiny of the Nations, Page 30

Both conservatives and liberals have their pet ideals that are being challenged or shattered by the seventh ray influence. The magical aspect of the ray, which is enhanced by the fifth ray of science (many magical innovations) has shattered numerous religious beliefs and the organization part, empowering business and law, is challenging liberal ideals. If business does not align with their ideals they are against them and if law does not agree with them they ignore or break it.

DK indicates that a cycle of lawlessness draws the attention of an avatar which indicates we are in a situation today where such an event as the reappearance of the Christ may be near:

“The spiritual statement by Shri Krishna, to be found in the Lord’s Song, the Bhagavad Gita, was an announcement, preparatory to the coming of the Christ. In that Song He says: ‘Whenever there is a withering of the Law and an uprising of lawlessness on all sides, then I manifest Myself. For the salvation of the righteous and the destruction of such as do evil, for the firm establishing of the Law, I come to birth in age after age.’”