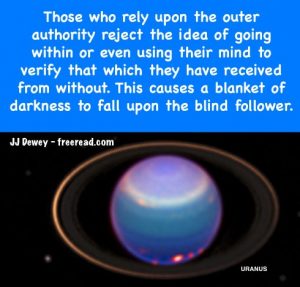 Truth Within and Without

Let us consider the common belief that truth “is never about the outside.”

Now when the majority of people hear this they will think “Yes, of course that is true. The Kingdom of God is within.”

Now let me give you a statement which is equally true, but which you may not have heard before.

“Truth is never on the inside.”

If truth is not on the outside or the inside then where is truth?

To illustrate this all we need do is to look at the two extremes.

A person on this extreme will not seek to register truth within, but have it verified by an authority without to whom he has given his power.

“The earth is only six thousand years old.”

“The Bible says so?”

“How do you know the Bible is literally true?”

“My parents taught me.”

“What makes you think your parents are right?”

Here the person is basing his version of truth on that which was given from the outside with no inside reflection.

“The cause of the California energy crisis is deregulation.”
“What makes you think that is the cause?”
“I heard it on the news.”
“Why do you think the news is correct?”
“Well, they wouldn’t say it if it were not true.”

This person is as far away from the truth as the first because his authority is the Beast – which is an outward authority accepted “just because.”

Now let us look at the other extreme.

Here Ron mixes up truth with perception. If you perceive something from within it is only true that you perceived it, but it does not follow that your perception is true.

Imagine trying to dial your friends by using numbers you randomly perceive from within. It would be pretty frustrating.

We have all heard cases where some cruel adult locked up a child in his room for ten years or more, so the child had no contact with the outside world.

Now in this case the child is forced to go within for his stimulation and learning from without is close to zero.

If learning from within is the goal then after ten years in isolation the kid should be a genius, right?

Not quite. The interesting thing that researchers have discovered is that during these long periods of isolation the child learned virtually nothing and its consciousness was as if the ten years did not exist.

If the child were locked up at the age of five and released at fifteen he will still see himself as a five year old. Lack of stimulation from without brought his progression to a halt.

This lack of progression is something that I have observed in both extremes of thought. The literal Bible believer cannot get past his outward authority riveting him into his mindset and the “all is within” person will not take an objective look at reality as it is.

A couple years ago several group members were trying to convince me that all knowledge is within so I gave them a challenge.

I wrote down a one digit number in my notebook and challenged the group to go within and retrieve it. Now as soon as I wrote that in the notebook it became true that at this moment in time and space I had indeed written a certain number.

The group guessed every number they could think of from 1,2,3,4,5,6,7,8 and 9 and none of them were correct. They were beside themselves until someone realized that it must be a negative number. Finally when the group was headed the right direction through the process of elimination and about a half dozen more guesses they discovered that the answer was minus 2.

The interesting thing is that no one by going within was able to even discover the direction of the number (positive or negative) let alone the number until almost all wrong answers were eliminated.

Now it is true that the number was written in the akasha and an adept could have retrieved it, but none on the group who were preaching that they have this great power to go within and find truth were able to.

The question is this. What good does it do a person to believe that they can go within and retrieve all knowledge when they cannot manifest that belief?

The final test of the validity of a belief is whether or not the belief can be demonstrated.

So how would an adept have retrieved the number? Wouldn’t he have gotten it from within?

Answer: No. Within alone does not cut it. He would have gone to his higher senses within and observed the Akashic records without. Using a balance of the within and the without he could have retrieved the number.

So why am I teaching this and why is this important information?

The answer is this: if a person has the simple belief that all he has to do to get any information in the universe is to go within, then, if this belief is strong enough, it creates a thoughtform that hovers around the seeker almost as a separate living entity that has a life of its own. This quasi entity also picks up information from questionable sources and feeds the seeker.

What often happens next is that the seeker gets more and more facts and data fed to him from the thoughtform. Usually there is no way to confirm whether or not this data is true and no principles are ever transferred.

This person will then get all kinds of false information filtered through his belief system. If his beliefs are centered around extra terrestrials he may believe he is in contact with ZOR from Alpha Centauri. This ZOR will have a piece of data for any question asked. He can tell you the exact hour the great earthquake will come, the exact date the world will end, when the mothership will show up, how many planets are in his system, how old the universe is, what parts of the earth will soon be under water and so on.

The thing is that ZOR is telling you nothing that Larry, Keith or Benjamin couldn’t think up just as well. I could say Alpha Centauri has 10 planets around it and one of them is populated by intelligent lizards and who could prove me wrong?

I could say that the mothership will show up July 5, 2025 and no one could prove me wrong until that date, and even at that time ZOR will tell us that mankind was just not ready in time and the date was moved up.

Beware of anyone who claims to be going within and only brings forth facts and data, but no principles. True disciples of the Christ and the Masters around Him will always teach or amplify principles and teach others to find truth through such principles and verification of principles.

There is no knowledge, facts and data as we understand them in the formless worlds. This is why you cannot retrieve them by going within. You can go within and use the power of the Spirit through your soul to confirm true principles, but you cannot acquire data only by this high method. On the other hand, after a principle is made clear to the student, through an increase in light, much knowledge then becomes available to the physical brain that was previously hidden.

Consider this analogy: You as the master of your body are like a god to the infinite little lives who live there. Similarly, the one God has the whole universe as a physical body, and you are a tiny life that lives within this greater body.

Now there are an infinite number of things going on in your body of which you are completely unaware because your attention is on a higher level. Right now your kidneys and liver are doing a fantastic and complicated job of removing poisons from your body and you are completely oblivious as to how it is done and the intelligence that is doing it, even though these life energies are a part of you.

Your tiny cells with their DNA are duplicating themselves with overwhelming intelligence and you do not have a clue as to how it is done.

In other words, you (the wholeness) as a god to your body “know nothing” about many of the things going on there. If your little cells were to ask you a question about how to alter their DNA there is little you could do to help them because your attention is on a higher level. Because these little lives have their attention on their own world they are expected to solve their own problems You, as a larger entity, have your own new worlds to conquer.

If there were some purpose in it you could use your power of ATTENTION to commune with the lives in your body, but it is important that they handle their own problems so you are allowed to place your ATTENTION on the world where your normal consciousness and Purpose is.