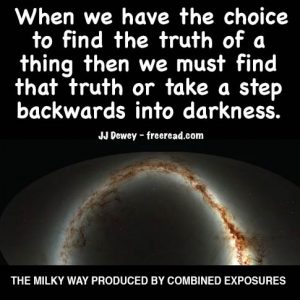 The current question is: There are three main criteria in finding the correct path at the Middle Way. What do you suppose they are?

The first was common sense on which we elaborated.

The hint for the second was as follows:

“Keep your mind steady in the light.”

How do these two statements work together to lead us to that straight and narrow path in the middle?

First let me clarify “the Middle” as it is being presented here. The Middle Way I am presenting leads to a path. A path is not the end of a journey but a beginning. As we find the path in the middle and walk upon it we are still functioning in the world of duality. But by finding the path we make maximum progress in this world. We learn to “live in the world but not of the world.”

At the end of the Path, ages and ages hence is a pralaya of rest or a point of absolute stillness from our point of view. Even though some call this the No Thing, and it may seem to be from some points of view, it is not “that which is not, but that which is esoteric,” as Djwhal Khul expressed it.

Lorraine made a good stab at the question:

“So, to stay in the middle I must know where I am at and know how to get to the next step.”

She made several good points;

(1) See the big picture. If our attention is on one piece of doctrine or dogma then we will not see all the whole picture and without seeing the whole we will never correctly decipher the part.

If we follow the highest we know and act upon that which is revealed then more light will come and the next step on the path in the middle will be revealed.

The path in the middle has the illusion of movement because of the swing of the pendulum and because we are not perfect we weave on and off the path. Hence we must apply the principle of correction on the path just as we do as we drive down the road in a car. To get to the local grocery store we make hundreds of corrections with the steering wheel in just a distance of several blocks.

In short we must always follow the highest that we know and when we do this more will be given. When an additional glimmer of light is seen we must hold our focus on that light until the flame grows bright enough that the revelation will never be lost.

The third most important key in treading the middle path is to use and share that which is revealed in the midway point.

Is it necessary to share the light in order to keep the light?

The answer may seem obvious, but the path of correct use and sharing is difficult indeed. Correct use of the light of knowledge is called “righteousness” in the scriptures and correct sharing is called “love.”

Right use of light is extremely important for without it the light grows dim and the vision seen is forgotten. The only way to keep it is to follow these steps.

(1) Keep intention pure and focused on the ultimate benefit of the many rather than the few.

(2) Keep attention focused on the light revealed keeping the message bright within the consciousness.

Reader question. “So how can we be good servants in this age without being persecuted and martyred?”

This is a good question to pose to the group. What are steps disciples in the Aquarian age can do to avoid the pitfalls suffered by the disciples of the Piscean age?

There has been some discussion about the interplay between those of lower and higher evolution.

Let us suppose that a member here was a Master in disguise. Would he be of such a high vibration that it would be useless to question him?

Soul which communes with Spirit lies within each one of us and anyone who seeks with a sincere heart and focused attention can contact the chords of truth that ring within us all.

If a devil, a man or an angel speaks we all have the right to run the words by our souls and verify them for ourselves. The beginners on the Path merely have more, or allow more distractions than the seasoned traveler. These distractions are set beliefs, glamour, illusion and other problems that turn the neophyte’s attention away from the soul.

But even the simplest of souls with a pure heart and open mind can receive revelation from the God within and know the truth and thus become free. The amount of truth he can incorporate will be subject to his ring-pass-not.

What then lies in the mind of the highly evolved that the beginner cannot comprehend?

Remember my analogy about the two people on the path? The one was ahead of the other and was not “better” because of it but was merely familiar with parts of the path that had not been available to the one with the later start.

The one farther upon the path understands the beauty of the scenery before him and can relate it to the one behind, but the one behind will not have a full understanding of the beautiful mountains and valleys until he actually gets there.

The blind man may take hold of the elephant’s trunk and think the animal is like a great hose, but he cannot appreciate the total majesty of the animal until he can see the whole of it.

Even so, the beginner cannot appreciate the vision, the thoughts, the goals, the problems of a disciple or Master until he either advances a great deal in his evolution, or joins in with the whole through the Oneness Principle.

We may all have our comments and opinions of the magnitude of the confrontation the Christ had in the Garden of Gethsemane, but without a revelation or going through the experience ourselves there is no way we can appreciate what he went through.

The angle of vision and the problems faced by one progressed upon the path is generally not available to the beginner, yet this is not important, for each of us has all the problems we can handle, and if we just concentrate on solving our own complexities we will not care so much about what the Master faces. That is his problem and he is the one to deal with it.

The important point is that the truth as it applies to each of our lives is available to all. As Jack Nicholson says – we all can’t handle the truth, but nevertheless, it is available to those who reach out in real faith.

A question is arising among the group about what a true teacher, master or Avatar would do if he appeared among us. Would or should he announce himself? Should we be open to the possibility that a great teacher or even the Christ may show up among us incognito?

The answer to the latter is yes. Teachers, initiates and avatars will come and we must be open to the idea or we could wind up missing them or even opposing them.

Should the Avatar announce himself? There is no rule about this. His method of approach is for him to decide, but normally he or she will not announce himself as one of the great ones. One of the main reasons for this is that the true teacher in contact with the Brotherhood is very humbled because he realizes that there are many far above him and when in touch with these greater lives through the Oneness Principle it seems absurd to announce himself as a great one. In the whole scheme of lives he realizes he is not that far away from the sparrow singing in the back yard, let alone his next door neighbor.

If we examine the history of the race we will see that the ones who have truly proved themselves a benefit to humanity made no big announcement of themselves as a great one and usually had a very good rapport with common men and women. Generally it was the benefactor’s enemies who thought of themselves great ones and his true friends were the “little people.”

There are other groups where every other member thinks he is a world savior and announces himself as such, but this group seems to have a refreshing lack of claims. Of this I am glad. I think we are a healthy bunch here.

If any of us considers himself to be a great one then he or she should follow the example of the Master himself. Jesus never clearly announced himself as the Christ. His only announcement was in his teachings and his works. Because they were powerful the people began to wonder.

Even his cousin, John the Baptist, who baptized Jesus and saw the Spirit of God descend upon him was not sure about Jesus and while in prison sent his disciples to specifically ask him if he was the Messiah. He wanted to know that his mission of preparation was successful before he died.

The disciples of John obediently approached Jesus and asked him if he was the Messiah.

To this question Jesus told them to abide with him for three days and then to tell John what they saw.

The disciples of John thus stayed with Jesus for the three days and listened to him teach and watched him heal the sick.

After this period of time they returned to John and the Baptist eagerly asked them what the answer of Jesus was.

They explained the invitation of Jesus and then told John that they saw the sick healed, the blind see and the lame walk.

When John heard their answer he was then satisfied and went to his death in peace.

On the other hand, let us just say that Jesus would have merely said “yes. I am the great Messiah that was prophesied to come.”

Do you think John would have been satisfied within his soul?

No he would not have been. He would have died with doubt in his heart for any person can make a claim, but only a few can teach the words of light and demonstrate the power of God to the people.

He who makes a claim based on ego puts a cloud between himself and his soul and in the end his claims of glory will return to embarrass him.

Those who humble themselves before those sharing greater light will be endowed with the glory of God from on High and generations unborn will yet warm themselves with their light and love.

Let us join the great ones together my friends and humble ourselves so any greatness which is manifest is from the one Spirit that permeates us all.