There was a beginning to time, but no beginning to God for God created time from a point that knows not time. From eternity the Father/Mother/It existed as a point of life with no form, hence no time, no space, no motion, and no mass. It becomes the He/She/It who is eternally reflected as a circle around the point. The circle around the point is the Eternal Son/Daughter and the interplay of the two is the Holy Ghost. The beginning of visible creation is male because all things seen are in a state of radiation and is polarized in the male. All things unseen, which create the magnetic energy of the universe, and holds all things together, is female. The seen and the unseen are the two great poles of the Creative God.

The Father/Mother God or the Originating Decision, then reflected Itself as the Son/Daughter. Thus we had the first atom, or Adam, which was the point in the center, the originating God circled about by the prime creation.

Because spiritual creation was produced outside of time and space it is eternal and all embryonic lives are eternal. From our point of view all creation has always been and will always be. The word creation is not an accurate word to describe spiritual manifestation because the word implies a beginning and an end. Since the origin of all creation exists outside of time and space there is no beginning and end to these things.

All there is existed and still exists within this Point of Life, for It dwells in Eternity, or the Eternal Now, for all things are present before It. There is no past or future for the Life, but only Now. It sees beginnings and endings as Now, just as we can see the beginning and end to a line we draw. We can see the whole line with its millions of possible sections in one glance.

The infinite reflections had relationship between one another because they were all One in origin. This relationship is called Purpose and Purpose began to vibrate and this vibration creates the universal wavelength that manifests all things.

At the same non time that Purpose was created the vibration of Light and Love was manifest within the originating wavelength.

Light and Love and Purpose exist for eternity beyond time in the Eternal Now.

If we substitute a picture for this Eternal Now we can visualize timeless creation. Assuming the left side of a picture is the beginning and the right side the end, we can see the beginning and end with one glance; so does the Life see all things in creation – past, present, and future – all at one glance and knows the end from the beginning. It, however, sees time and space constantly changing to fit that end, but even the changes between beginning and end are, before It’s eyes, seen as Now.

The Life is like a creative artist with one great paintbrush in It’s hand, and with that paintbrush all that is, is made manifest. The hand which holds the paintbrush is that energy we call Purpose. Without Purpose, there would be no creation, for Purpose is behind all there is. It is the motivating Power of God.

From the beginning of creation then, there is eternally projected the Ray of Purpose. Purpose has no beginning because the Life that projects it has no beginning; thus, it has no end. Purpose is like a single endless line, or spiral, and because it is endless, it penetrates all things. When Purpose decides to paint pictures, it projects vibration and thus creates the wavelength. The top of the wavelength is called Love and the bottom is called Light, but Purpose is always there existing unseen between the two. It is the motivating Power.

The creative hand is Purpose, the paintbrush is Love, and the beautiful colored paints are Light. These three form the Trinity of God, projected by the One Life and are the powers behind all creation.

These powers are symbolized by the following diagram:

From Decision/Life is projected the supreme energy of Purpose. In the scriptures, this energy is represented by God the Father, the Most High God.

When Purpose vibrates with the objective of creating divine art, or manifest form, then the illusion of two separate energies is created. These energies, or aspects, are Love and Light, and are not separate from Purpose any more than Purpose is separate from Life. Purpose, Love, and Light are three Aspects of the One Life. They are one energy, but appear to be three energies. They are the One in Three, and the Three in One. They are the energies of the Father, Son and Holy Ghost.

One of the best illustrations of this is the guitar string. When it is stationary there is before you only one string, but as soon as you pluck it there is immediately produced the illusion of three strings. There appears to be three strings until the vibration ends. Then we see one string again.

So it is with creation. There appears to be three energies as long as the one energy of manifestation is vibrating, but creation is based upon the illusion of the three. In reality there is only one. While manifest creation is in existence in time and space the Trinity will be real to us, but when the vibration that creates all things is stilled then all the universe will go back to its source: The One Great Life who is God, or the Singularity as it is was called by Stephen Hawking.

Notice that the line of energy that produces Love and Light is a single emission. It is only the fluctuation of that one energy on both sides of Purpose that creates the illusion of Two, or the great illusion of Duality.

Even though the appearance of the Trinity of strings is an illusion that does not negate its value. Quite the contrary, for without this Trinity it would be impossible to create any rhythm or melodies and the guitar would be able to fulfill no useful function except to stand silent in the closet.

Even so can we thank the One Great Life for reflecting Itself and creating motion, or vibration, so the Music of the Spheres, and All There Is made manifest so the various parts of God can know themselves and each other.

There are seven worlds created in our reality from the universal wavelength. The highest four do not have form as we know it, but from a higher point of view all that is produced by wavelengths is still form. The lower three create the three worlds of form as is registered by the consciousness of man.

The original wavelength is of such a high frequency that it is beyond our conception. This produces the highest spiritual world called the “divine” in esoteric writings. However, the creation of the second world down in vibration is a great mystery, yet at the same time simple. It is created by the vibration of the original wavelength. The general idea (but not perfect) is as follows:

This has the interesting effect of creating a secondary wavelength seven times larger than the first. It helps to visualize it if we draw a line through it to see the wavelength of the second world.

This process does not stop here. The third wavelength vibrates and creates the fourth world of the Buddhic Plane, or intuitional energy.

The understanding of this principle is the key to creation as employed by Masters and Gods of legends past. After passing through the spiritual worlds an idea is formulated in the mind. When it is clearly visualized it exists in the mental vibrations. The mental vibrations are shaken by the power of Purpose and the thought becomes clothed in Astral or emotional matter. The wavelengths of the Astral are too shaken with Purpose energy and physical manifestation appears.

Within each of these seven worlds exist the Seven Ray energies. They are created through a ripple effect as various wavelengths involve and evolve. The dot indicates a point in space and time where a planet, individual, or atom may find itself.

The One Wavelength further subdivides itself into infinite amounts as illustrated below:

When we consider the originating wavelength a question that may arise is which direction did it go? All the above diagrams have it going from left to right. This is not exactly correct. These illustrations are two dimensional in order to register preparatory truth upon the mind of the seeker. 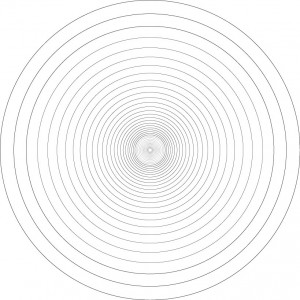 Visualize the above ball as the entire universe. This is all the physical form there is in the higher four worlds, (even though there is additional form of imagination) only wavelengths riding upon wavelengths emanating from a center point which is God. The Center point plus these four worlds, dimensions or degrees of wavelengths produce the creative mind of God. This is sometimes called the universal mind. Science has not discovered the higher wavelengths of the physical plane or any of the astral and the formless worlds are much more illusive than these.

The current creative life, the human, has within him all the wavelengths and is the soul of the universe, the mediator between God and matter.

The Universal Mind craves experience and as it contemplates in its four energy states it sees all possibilities. Each possibility is an extension of itself, created in its own image and becomes a point in the Universal Life. The greatest of these thoughts, according to our knowledge, gather wavelengths and become galaxies. The next order of thoughts gather and become suns, the next order planets, the next life forms, the next atoms, the next subatomic particles and so on down. These are the order of the greatness of the thoughts of God, but the order of creation proceeds from the small particles to the large.

Each point of life is in the image of God, for God’s thoughts reflect God. The projection of God rides on the energy of Purpose and to understand it one must take two mirrors and place one in front and one in back of yourself. Look ahead and you will see yourself projected ad infinitum. God is still One, but appears to be God the many.

By the time that the reflection of God enters the fifth world some distortion occurs so one part of God appears different from another part. As the reflection enters the astral, or sixth world, the distortion is greater still. Finally, the seventh, or physical, is entered and imperfection, or distortion reaches its greatest degree.

Here one star is different from another, as well as the planets, lives and all forms. The forms are all created by a disturbance of divine force in the higher worlds and that disturbance was caused by the Thoughts of God.

You and I are also one of the thoughts of God in the Eternal Now and as such never had a beginning and will never have an end. If we trace ourselves back to our source we will see that behind the thought of us is a point that is a reflection of God and that reflection comes directly from God. In this way we can see that we are created by God, as the religions teach, but at the same time we are Gods because we are in His image, or reflection.

All possibilities exist within the Mind of God and they all manifest somewhere in His universe. Our job, as life forms in His image is to live out all the possibilities that we can. When we have then experienced all possibilities within our sphere, God then makes new circumstances and creations and we go on to greater possibilities. Thus it is for all eternity.

1 thought on “The Molecular Relationship, Chapter 1”