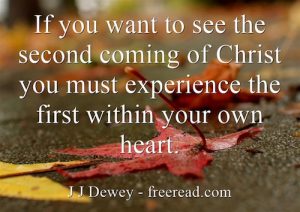 Reader: I’ve just been reading JJ: Dewey’s writing. To be specific, his explanation of 1Thessalonians 4:13-17 says the dead remain dead till the return of Christ on earth so where does reincarnation come in? In other words, when does one really reincarnate?

Here is the text of the scripture:

“But I would not have you to be ignorant, brethren, concerning them which are asleep, that ye sorrow not, even as others which have no hope. For if we believe that Jesus died and rose again, even so them also which sleep in Jesus will God bring with him. I

“For this we say unto you by the word of the Lord, that we which are alive and remain unto the coming of the Lord shall not prevent them which are asleep. For the Lord himself shall descend from heaven with a shout, with the voice of the archangel, and with the trump of God: and the dead in Christ shall rise first: Then we which are alive and remain shall be caught up together with them in the clouds, to meet the Lord in the air: and so shall we ever be with the Lord.” I Thess 4:13-17

I would guess that the verse you are concerned about is where Paul said that them also which sleep in Jesus will God bring with him.

Evidently you think that because the righteous are sleeping, that they cannot reincarnate. But we need to look at verse 17 which says this:

“Then we which are alive and remain shall be caught up together with them in the clouds, to meet the Lord in the air: and so shall we ever be with the Lord.”

Notice here the interesting phrase that Paul expects himself and others to be alive when the Lord comes again. Now it’s been around 2000 years since Paul said this and Christ has not yet come.

There are two ways that Paul and his disciples could be alive when Christ comes.

(2) Christ made a second appearance in his lifetime.

Actually both could be true.

Concerning the second possibility there is an interesting quote from Josephus that indicates that there was some type of second coming in Paul’s generation He recorded a possible second coming of Christ on May 30, 73 AD:

In addition to this Tacitus, the Roman historian, relating the same events, wrote:

“In the sky appeared a vision of armies in conflict, of glittering armour. A sudden lightening flash from the clouds lit up the Temple. The doors of the holy place abruptly opened, a superhuman voice was heard to declare that the gods were leaving it, and in the same instant came the rushing tumult of their departure” (Histories, v. 13).

In addition, Eusebius (A.D. 325), quoting from the Latin Josephus, in the fourth century wrote:

“For before the setting of the sun chariots and armed troops were seen throughout the whole region in mid-air, wheeling through the clouds and encircling the cities” (Eusebius’ Ecclesiastical History, Book 3, Ch. 8)

On the other hand, even if we do not take this miraculous event into consideration the scripture does not discourage the belief in reincarnation. Notice he talks about they who are asleep in the present tense. He doesn’t say that they’ll remain asleep for 2000 years or for ever.

A member commented on the importance of being influenced by principles rather than just feelings. There is a principle behind keeping our word. It goes to the core of the meaning that the word is God. This is one of the secrets of eternal life and in our own little way we can take a step toward mastering the secret by learning to keep our word. You were obviously taught this principle in a past life, and it is embedded within you. When we learn a principle that contains a concept that brings understanding, the light remains with us when were reborn, and we intuitively understand how it is to play out in our lives.

After reading some humorous remarks in posts I thought it may be a good time to inject some humor.

Osama Bin Laden was killed by a falling rock and went to hell.

“Where’s my 70 virgins? Where’s Mohammed?” he exclaimed to the devil.

“Sorry,” said the devil. 3000 people who died on 911 demanded to Allah that you go to hell. The good news is that we have modernized here and you have three choices as to your final destination. You must chose one, but I warn you. Once you make a choice there is no going back. You must spend eternity there.

Several imps with pitchforks prodded Osama Bin Laden to follow the devil to the first door. He opened the door and Osama Bin Laden saw a room full of people with shaved heads standing on their heads on pointed swords.

Osama Bin Laden cringed and said. Good Grief! We wouldn’t even treat Bush this bad. Show me the next room.

The devil opened the next door and Osama Bin Laden saw a room full of people again shaven standing on their heads on sharp razor blades.

Again Osama Bin Laden shuttered and said, “Not even Cheney deserves such punishment. Show me the next room.”

The devil opened the third door and to Osama Bin Laden’s amazement he saw a room full of people sitting in fresh dung up to their waist drinking coffee.

Osama Bin Laden stared at the people and said, “This is bad but not as bad as the others. If I have to make a choice I’d pick this one.”

At that, the devil threw him in this third room. Just as Osama Bin Laden settled in the devil clapped his hands and shouted out. “OK you fools. Coffee break’s over. Back on your heads!”