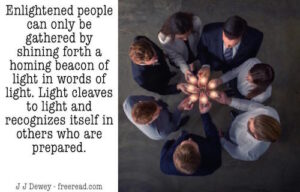 There are numerous overlooked prophecies from the scriptures concerning the internet. Let us look at a few.

“Again, the kingdom of heaven is like unto a net, that was cast into the sea, and gathered of every kind:” Matthew 13:47

In the other gospels it is written “kingdom of God.” One of the properties of the kingdom, as it manifests on earth, is that it attracts seekers by casting out a net that “gathers of every kind.”

What was the “net” in the early church that gathered the saints? It wasn’t just the gospel. The gospel alone is not a net for without the cooperation of the disciples in casting forth the words and teachings of the kingdom there would have been no net and no gathering.

In that age there was a NETwork of disciples that was cast abroad and gathered in of every kind. This net was created by the disciples traveling to the various nations and creating the various points of the net.

Today a new net is available to disciples so they do not always have to physically travel. Amazingly it is called the interNET, or just the NET for short.

“Again, the kingdom of heaven is like unto a net, (the Internet) that was cast into the sea, (the peoples of the earth – See Revelation 17:15) and gathered of every kind: Matthew 13:47

“Which, when it was full, (When most are online) they drew to shore, (Many physically gathered from the Internet) and sat down, and gathered the good into vessels, (Cities of Light) but cast the bad away. Matthew 13:48 So shall it be at the end of the age: the messengers shall come forth, and sever the those in error from among the just, (the teachings of light will be rejected by those who are not ready) Matthew 13:49

“And shall cast them into the furnace of fire: there shall be wailing and gnashing of teeth.” Matthew 13:50

The truth of enlightened teachings will be so obvious that it will burn like a fire in those who refuse to accept them. The fire will produce the heated emotions of anger in those who are not ready.

Isaiah talks about a highway that will be used as to tool to gather the lights.

Isaiah chapter eleven reads: “And it shall come to pass in that day, that the Lord shall set his hand again the second time to recover the remnant of his people (those with the soul consciousness), which shall be left from Assyria (In the Hebrew this means the successful and prosperous people), and from Pathos (The southern countries), and from Cush (The darker skinned peoples), and from Elam (Those who seek out the mysteries of God), and from Shinar (Those who are seeking to leave unenlightened areas and situations and want to dwell with more enlightened people), and from Hamath (Those who are seeking protection from possible future calamities), and from the islands of the sea (Not only literal inhabitants of Islands, but also signifies those who think for themselves and rise above the sea of emotions). And he shall set up an ensign for the nations, and shall assemble the outcasts of Israel, and gather together the dispersed of Judah from the four corners of the earth.” Isaiah 11:11-12.

The “ensign” will be a teaching or sign that will be visible from “the four corners of the earth,” and will be a magnetic force to attract the lights of the planet.

The next verse is interesting: “But they shall fly upon the shoulders of the Philistines TOWARD THE WEST; and they shall spoil them of the east together…” Isaiah 11:14

“The Philistines” is a symbol of intelligent people, but without spiritual consciousness. This scripture will have an amazing fulfillment. When the Israelites (the lights) gather first in the West many of them will literally “fly” in aircraft owned by the modern Philistines toward the West and they will spoil them of the East together. Those of the East are those religions in the east who are supposed to be enlightened but will be “spoiled” by the West because the teachings there will eventually be greater than that had among the Jews, Hindus or Buddhists.

The verse continues: “…they shall lay their hand upon Edom and Moab; and the children of Ammon shall obey them.” Isaiah 11:14

The word “lay” is a mistranslation of the Hebrew SHALACH which means to “Send out, stretch forth, or reach forth”. “Shall obey them” is also misleading. “Obey” is from MISHMA’ATH which is better rendered “hearken” or “to hear intelligently”. Several possible words are also left out. The ancient Greek Septuagint manuscript has the word “first” inserted twice in this verse.

Most important is understanding what is meant by Edom, Moab and Ammon. “Edom” means red and corresponds to the American Indian. Moab is literally “her mother’s father.” Israel, or Jacob’s, mother’s father was Bethuel which means “destroyed of God” or “broken in pieces by God, or great power”. “God” comes from EL from BethuEL and can also be translated as “strength” or “power.” Those who are to receive the hand of fellowship will be those who have broken hearts and contrite spirits, those who have had their faith destroyed, or those who have suffered physical calamities.

Putting this all together and adding the two “firsts” from the ancient manuscript we have the following meaning: “They shall first extend their hand to the downtrodden and humbled peoples and those who have been broken by great power, but those who are the most like the IsraELites (or those closest to spiritual contact) will be the first to hear intelligently.”

Verse 16 reads: “And there shall be a highway (the Internet – Super Highway) for the remnant of his people, which shall be left, from Assyria; like as it was to Israel in the day that he came up out of the land of Egypt.”

Isaiah further states: “The voice of him that crieth in the wilderness, Prepare ye the way of the LORD (Second Coming), make straight in the desert (a time when little real truth is taught) a highway (Internet) for our God. Every valley shall be exalted, and every mountain and hill shall be made low…”

“…and the crooked shall be made straight, and the rough places plain.” Isaiah 40:3-4

If governments, the rich and powerful try to present lies to the people they will be exposed on the Internet and “made straight.” The “rough places” are cover-ups, spins and deceptions presented to the people through the media and the powerful. The Internet will grow more and more powerful until such distortion will no longer be effective, but the truth will become “plain.”

Finally Isaiah sums it up: “Go through, go through the gates (gateway to the net); prepare ye the way of the people; cast up, cast up the highway (gather on the super highway); gather out the stones (from EBEN implying those who build, create or initiate); lift up a standard for the people. Behold, the LORD hath proclaimed unto the end of the world (earth), Say ye to the daughter of Zion, Behold, thy salvation cometh; behold, his reward [is] with him, and his work before him. And they shall call them, The holy (into wholeness) people, The redeemed of the LORD: and thou shalt be called, Sought out, A city not forsaken.” Isaiah 62:10-12

Remember. Each inspired writing has at least three interpretations. These scriptures can be interpreted from another angle of vision, but I think you will agree this is a fascinating one.

To visualize the complete fulfillment of these prophesies we must realize that this “super highway” is just in its infancy. If we could see ten or twenty years into the future we may not even recognize it, but I think we can all see that it can be a great tool in gathering knowledge as well as people who have much light to share.

Here is one final scripture that could refer to the Internet.

The internet has done much to fulfill this prophesy and there is more to come. It is difficult for anyone government, business, religion etc. to keep anything secret these days. As soon as some insider puts it on a blog it is “proclaimed upon the housetops.”

I know that there are people who do not love their fellow man, and I hate people like that! Tom Lehrer