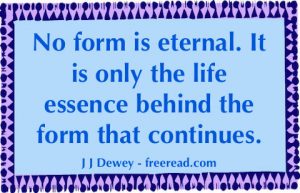 I’m working on the new H. P. Blavatsky presentation. Since this is a significant discovery I thought I’d take the time to do it right and present it on a web page.

Glenys is right that H. P. Blavatsky did incarnate again as a male. Before she gave us the reference on her handwriting all I had seen was her signature on the cover of The Secret Doctrine, and that is not enough for good analysis. For one thing, the signature often differs from the normal script. It presents the image we like to portray to the world, which is often different than the real person revealed in regular writing.

When I looked at H. P. Blavatsky’s writing on the web I thought to myself that I had seen the writing before. But then that would be impossible for I had never seen H. P. Blavatsky’s regular handwriting. Then I racked my brain trying to recall where I had seen that handwriting before and it came to me. I dug up some samples of this person’s writing and compared it to Blavatsky’s writing and was amazed at the similarities. As I examined more carefully I concluded that there was at least a 99% chance that these two were the same entity.

Just as your handwriting may not look exactly like it did 20 or 30 years ago there are often even more pronounced differences between lifetimes. Proving through handwriting that two personalities in two lifetimes are the same person is a little like proving that your diary as a teenager was written by the same person who writes with a somewhat different script today.

It can be done, but not by proving there is an exact match.

I am making a case as to who H. P. Blavatsky was in her next incarnation. In addition to proving this fact my presentation will also be a strong case for proving reincarnation.

By endorsing the Principles of Unification you are not making any type of oath or promise. An endorsement is just what the word implies. An endorsement.

You can endorse the eating of Big Macs, but it wouldn’t be an oath unless you gave your word that you would eat one a day or something like that.

You have no more chance of getting on anyone’s black list because of endorsing the Principles than you would by being on this list or by being a registered Republican or Democrat.

Glenys said something interesting I do not recall hearing or reading before:

“Incidentally, because sometimes people ask, the male body is able to withstand the force of the 1st ray energies experienced when taking the higher initiations which is why the majority choose to take those initiations in male bodies. I think this is changing though. HPB took her 4th initiation as a female (but suffered greatly for the privilege) and I think we shall see more female masters in the future.”

JJ: It makes sense that a male energy would have an easier time handing first ray energy. I’m curious where you heard this as well as the source of H. P. Blavatsky taking her fourth initiation. I am aware that she suffered a lot with health problems but never heard of them being connected with initiations. Indeed they could have had an effect, but so did her chain smoking.

There is a strong analogy between a spoken voice and a mental voice. To think is to speak low; to speak is to think loud.” Neville

To read the full discovery go to this link: