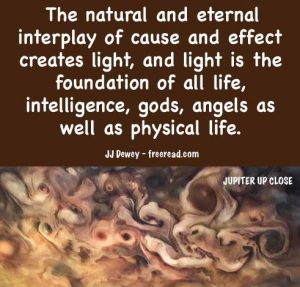 Question: “Is the One (LOGOS?) at the apex of the Hierarchy that transcends (or proceeds) All Others?”

Generally when a question like this is asked it is done with the idea something like this:

Why should I waste my time advancing from hierarchy to hierarchy for billions of years when, if I find the head guy (or gal), I can just make one giant leap into his presence and end the quest and lay down in the bosom of eternity forever and just be?”

Now you may or may not believe this way, but this expresses the basic attitude of almost all the astral based religious beliefs of the world.

For instance, the Fundamentalist Christians go berserk when one presents them evidence of a hierarchy of Gods. They like the idea of being saved by accepting Jesus , thinking this will take them that giant leap into the arms of the universal Logos. The search is over and there is no more evolution to take place.

Many Buddhists see Nirvana as one giant leap into the arms of the Universal also marking the end of the quest.

Islam sees Allah as the highest there is and accepting him is the ultimate. There is no further advancement to be made.

Many New Age philosophies also follow this reasoning. For instance, Ekankar has their EK Master as the highest being in the universe incarnated on the earth to teach them how to make a giant leap over thousands of useless lives into the arms of the ultimate God, never to be reborn again.

Now a growing new age belief system is emerging that is not tied to any particular group which teaches that we need to find the ultimate God of the void. This God is beyond duality, beyond form, beyond consciousness, and if we merely focus ourselves on that point (similar to acknowledging Jesus to be saved) which is neither right nor left, top or bottom, good nor evil, our consciousness will be magically transported to the arms of the Universal no more to be subject to karma or future lives. We will remain in a blissful state of nothingness for all eternity beyond time.

Thus when the concept of eternal progression and the Hierarchy is taught one who is ingrained in orthodox religious thinking will almost always say:

“The heck with these small fries. Give me the top dog so the quest can be at an end.”

Well, the Hierarchy ahead of us are not so small a fry. As Djwhal Khul points out the Logoi above the Solar is to our consciousness, much higher than we are to a slug. He relates it to the consciousness of a human compared to a single atom.

Now think of it. How much attention have you given lately to teaching slugs or single atoms?

Even so it would be a total waste of time for a logos above solar to have anything directly to do with average humanity.

All in the universe are aided by another life of similar consciousness, but only a little further on the path. It is not in the plan for those a million miles ahead on the path to backtrack when there are plenty of helpers for all in each location.

So why do so many have this great desire to take this large flying leap to the arms of the highest life in the universe?

Answer: Because they believe they will be happiest there.

But what they do not understand is that we are happiest in working with the lives in the next kingdom above us, not 100 kingdoms above us.

If the average seeker were transported to the presence of the Solar Logos (far from the highest) what kind of exchange would take place?

The seeker may ask questions such as:

What am I supposed to do with my life?

How can I be of service?

What is the meaning of life, etc?

The Solar Logos would reply, “There are already millions of lives available in this solar system that can answer your questions to the extent that your consciousness can comprehend. What do you need me for? If you are not ready to even hear the words of a Master on your planet, what makes you think you can have any understanding of my purpose?”

If a slug came to you asking how to be a better slug you would tell him to find a slug ahead of him and learn from him. You do not even want to deal with the tiny lives when the great lives are much comparable.

Even so, from the viewpoint of the Solar Logos, one of his direct disciples is worth many humans and that is where he needs to place his attention.

A good teacher for us here in the human kingdom would make more sense to us than instructions from the Solar Logos or higher.

Now let me quote from a previous post I made.

“I wrote earlier about part of the chain of the Hierarchy. There are various ones on this earth with the highest being the Planetary Logos. The highest in the solar system is the Solar Logos, however there are millions of Hierarchical workers in between.

“The major leap above this is a logos over seven solar systems of which our Sun is but one.

“In our Milky Way Galaxy we have billions of solar systems and there are many great Logoi. The higher we get the lower their point on their potential ladder. To understand this principle consider that a flower is closer toward the end of its evolution than a human, even though the human is the higher life.

“Even so, are humans higher on their ladder than are the logoi. Thus the galactic logos is merely an idea in formation. This also applies to higher logoi up to the entire universe. The highest logos of which anything is revealed is The One About Whom Naught Can Be Said which governs seven solar systems. of which our sun is one.

“As you know there are also billions of galaxies which compose our universe, the end of which has not yet been discovered by our scientists. But it does have an end and beyond that we assume there are more universes.

“Now most metaphysicians assume the Hierarchy and creation goes on infinitely. They think that our universe is one out of millions and these millions form a greater universe and then there is yet another group higher and so on for infinity.

“The hierarchy ends with the universe of galaxies. The creative mind of God in our universe has reached it’s ring-pass-not at this point.

“Now there are an unlimited number of other universes, but the hierarchy in one physical universe is not linked to hierarchies in other universes. This is why I say that the Hierarchy stops at the universal level.

Any Hierarchy at the top of our universe of galaxies is very loosely tied together for the creative evolution of the universe itself is far from complete.” End quote

This universe is an evolving universe and as such the top logos of our system is in a state of BECOMING and solidifying his position and purpose. There is no top universe of all the universes as the relationship between physical universes will be virtually non existent for ages to come.

But what about the Big Guy, the one who is over all things?

In asking this question we ask it from a human point of view seeing the Big Guy as a great human sitting on a throne somewhere with human thoughts.

The universal One God is not a logos or a part of any hierarchy, but manifests through all the hierarchy as well as every life in the universe and is thus aware of the fall of a sparrow so long as the sparrow itself is aware of its fall.

But still one may say, “well, then, I want to go directly to this one God.”

The answer is that you do not go to the presence of the one God by defying His creative purpose and attempting to jump into a void of nothingness beyond all creation. This cannot be done and is not allowed to be done, for we are all caught in the motivating stream of original purpose and there is no way to escape it because we are one with it. The only thing we can do to move ahead is to find out our part in the Purpose and move with it.

But a lot of people believe that they have escaped duality and gone to the void back to the initiating one God.

Answer: The first thing that would happen if this were possible is that the person would disappear and be no more here in body or consciousness. In fact even his consciousness would be no more period.

Some through meditation or focused attention achieve states of consciousness bordering on bliss that seems beyond all duality and becoming, but in this I believe they are deceived. First, if such a state were truly achieved then duality could not pull them back. They would just disappear from this world.

Some do achieve contact with higher realms where duality is seen as a unity, but escape from the creative purpose of God is not achieved, nor is it desirable.