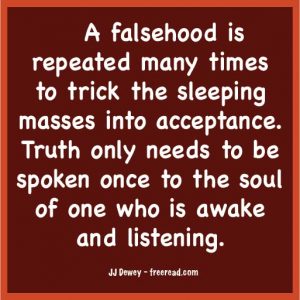 I was asked what the Masters do when the disciple they may be working with starts making mistakes or gets centered in the ego.

When this happens (as it often does) the Masters sit back and do nothing. They do not tell the disciple he is in error unless he sincerely petitions to know. Sometimes the disciple will discover his errors and sometimes he does not. If he does not he must come back in a future life and set things straight.

This is the reason soul contact is so important in any group. If a good portion of the group have such contact then they will sense that the teacher is in error and voice their concern and this will sometimes cause the teacher just reflection. If the teacher’s ego is in the way he is likely to turn into a dictator.

Many times with this group I have stressed that I could be wrong on any point that I present and the only way you will know for sure is through your own inner contacts. I can see why many teachers in the past have not done this – because there is always the danger that those who are in the personality will accuse the teacher of error and disrupt the flow when the teacher may yet be in the soul. Nevertheless, this is something that we must face in the great age that is approaching. It is a small price to pay for the group to seek and receive true soul contact.

I was asked to comment on the thoughtforms that the teachers of humanity make available for us.

Let me give you a couple of these.

(1) The concept that there are a group of disciples on the earth that are scattered among all people and groups, yet as a whole identify with none. The fact that there are this group of “new world servers” is a thoughtform available to the masses.

(2) The realization that we can hurt by attempting to help through wrong methods. From this comes the idea than an “enabler” may prolong pain rather than solve it.

(3) Over the past ten years the differences in political thought have been accentuated, forcing many people to formulate their beliefs in the light of day.

(4) Over the past thirty years businesses have become more group conscious and some see employees as an extended family giving more benefits through free will.

These four improvements are sample areas where the Masters send a general energy that can be picked up by those who are ready to help with the progress of the world.

On the other hand, specific teachings that stimulate higher evolution are not thrown out randomly into the ethers for all to pick up.

It is true that all truth is available through the soul when the disciple is ready, but as far as the work of the Masters is concerned, they are very discerning about the specific knowledge that they make available to disciples.

When new specific teachings are given out they are presented in an orderly manner with very little duplication. Duplication of efforts by giving the teachings to many would violate two laws the Brotherhood live by which are:

(2) The principle of incorruption.

It is the disciple’s job to give the teachings to the many.

Let us take the keys of knowledge for instance. It would take a lot of duplication of effort to give them out to a dozen disciples. To accomplish this task the Masters would have to neglect other work, thus they rely on the law of economy.

Through following the principle of incorruption the Masters attempt to present new teachings in as pure of a form as the written word can be. If the same teachings were given to a dozen disciples they would all present them in a dozen different variations causing much confusion as to who has the best version. The end results is that there would be much division and no good version would be accepted by the masses.

The teachers of the human race must work with the limitation of words which often make the transmission of core truths difficult. This is why soul contact is so essential.

Let us take the teachings given through Alice A. Bailey with which I know you are familiar. The Masters picked one person for the above stated reasons. There was not disciple A, B and C out there giving out similar teachings. The teachings were uniquely given out through her and there was nothing out there to compete with them for the Brotherhood do not compete with each other in the normal sense.

The inhabitants of the Kingdom of God work like a finely tuned engine. Each entity has his part to play that is not in competition with the other parts. When each does play his part correctly the engine runs smoothly. The Masters do not say “we need a spark plug so let us make this known to a thousand disciples.” How then could the engine run with a thousand spark plugs and no spark plug wires or other parts?

There is a part for all according to desire and ability, but we all have different roles to play at various times. We do change roles from time to time, but when you move on your job must be replaced by another.

Yes, my projections on the group do sound visionary and possibly impractical, but there are two important reasons why it may just happen.

(1) The teachings I present are confirmed by soul contact.

(2) I will not take my attention away from putting energy into the group. the promotion of The Immortal Series and other writings to be published.

A Course in Miracles and other inspired books are often distorted by self deceived teachers to the extent that the general public receives a very erroneous impression of their true value. The teachers of the race do their best to avoid this corruption, but until the majority receive soul contact no inspired teaching will be correctly understood by the masses and many of the teachers.