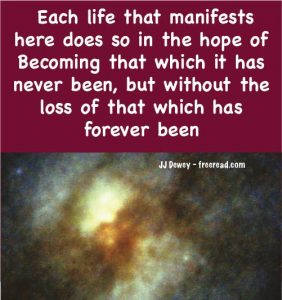 One of the most profound statements of all time was not made in an official book of philosophy, but by the playwright Shakespeare in Hamlet:

That is the question.

As is written in The Immortal it could have been more accurately written “To Become or not to Become,” but because this did not have the poetic ring Shakespeare used “to be or not to be”

When you look at this logically it certainly makes sense for the common belief of “Being” is to be inactive, to yield, to be still and just be one with God.

This is not what Shakespeare meant by “to be.”

Observe the verse which follows these famous words.

“Whether ’tis nobler in the mind to suffer

The slings and arrows of outrageous fortune;

Or to take arms against a sea of troubles…”

In the story “not to be” is to yield to the situations that confront us – to go with the flow. He even points out that we may live a long life by playing it safe and choosing “not to be” but it will be a fate worse than death. Death (“The Undiscovered Country”) is not to be feared, for in death lies the hope of “What Dreams May Come”.

He points out that we should not even let the fear of death prevent us from choosing “to be,” for if we risk all and then die we have at least chosen “to be.”

(It is interesting how many movie titles come from his words.)

Concerning those who choose “not to be” he states:

“With this regard their currents turn awry,

And lose the name of action…”

There we have it. Those who choose not to be “lose the name of action.” These are like the two approaching the Path in the parable of Decision who were paralyzed and just stood still and did not act or go forward.

“To be” then is to act and move forward no matter what the risk.

We must “take arms against a sea of troubles,” as the master writer stated.

Thus we see that “to be” as taught by the great playwright is very much in harmony with the teachings here on BECOMING.

There has been discussion as to whether BECOMING is male or female. Actually it is neither, but both the cause and the result of the interplay of the two energies. BECOMING is the action of Purpose, the dominating good which interpenetrates both male and female energies.

Female energies build forms and male energies destroy forms for in the reaching of the perfection of any decision one must both build and destroy.

A master painter works on a portrait and applies the brush to create the form (female energy).

Then he sees strokes and colors that he does not like so he eliminates them (male energy).

The key element of BECOMING is action based on either radiant (male) or magnetic (female) energy. Movement toward the greatest possible perfection is BECOMING, which is an eternal process. BECOMING has never not been nor shall it ever cease “to be.”

Incorporated in BECOMING is BEING. BEING is that state which in the East is called Pralaya This is a state of rest between creations. Djwhal Khul makes an interesting statement around this. He states that this is not a state of being which “is not” (or not to be) but “that which is esoteric,” (or hidden).

The state of pralaya can be compared to the painter after he finishes his portrait and is satisfied and just takes time to sit back and enjoy the fruit of his labors and then to contemplate before he starts a new creation.

In an attempt to BECOME the master painter all three ingredients are necessary: (1) the building strokes) (2) the destroying strokes and (3) Rest, absorption and contemplation between.

Number three is the true state of BEING and is part of the dominating good when its cycle has come. It is also one of the three ingredients of BECOMING.

Unfortunately the word BEING is associated by many with the decision “not to be” as spoken by Shakespeare. True BEING is not yielding to the line of least resistance but after we have taken “arms against a sea of troubles,” and have prevailed as Gods – only then will True BEING become known and no longer esoteric to us.