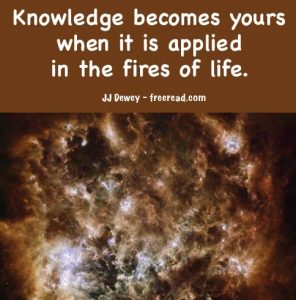 Question: What are the three sub aspects of the 5th Ray of Concrete Knowledge?

In the Ancient Wisdom the three prime aspects are usually called Power-Love/Wisdom-Active Intelligence.

But as we pointed out earlier, various organizations call them by different names such as:

There are hundreds of differing names used, but all convey a similar principle.

So what should we call the three sub aspects of the Fifth Ray? Again, this takes a little thought because I do not believe DK tabulated it anywhere.

He does say, however that the Fifth Ray of Concrete Knowledge or Science is “a reflection of the will-to-know.”

I would call this the first sub aspect.

What happens after a desire to know grows inside of you?

You then place attention toward the discovery, discernment and attainment of knowledge.

After you desire to know and place attention on that which you will-to know what then happens?

The three sub aspects would therefore be:

Question: Why do you suppose DK called it “Concrete Knowledge” instead of just “knowledge?”

As we mentioned earlier knowledge is one of the sub aspects of the Third Ray, but to indicate that we are dealing with another aspect, or view of knowledge, we qualify the difference in meaning here by calling it “concrete knowledge.”

Concrete knowledge is that which can be discovered and understood by the concrete mind by using a scientific or investigative approach.

This approach is limited, as spiritual thinkers know, for there are certain types of knowledge that is beyond the grasp of physical science and investigation.

Even so, this concrete knowledge is extremely important to all self conscious lives such as humanity. For instance, without concrete knowledge we would not be having this class on the internet, you would have no phone to talk on and no car to drive.

Which member of the original Star Trek had his personality on this Ray?

I expected a simple non questioning answer that this would be Spock, but I see that Susan is attempting to think outside the box:

“Spock was interested in the truth of a matter and facts but I don’t see him as curious, an emotional element nor the ability to discern outside of pure fact. So to me The Doctor personifies this better. The best scientists, despite their cold reputation, always have a side to them that is passionate to know, to understand and to pursue. Their emotions are not directed towards people but towards ideas, hence their “cold” reputations. Einstein was a terrible lover and had many failed relationships. I think a blend between Spock and the Doctor is more true to Ray 5. The Doctor as portrayed had too much emotion towards people to be a true Ray 5 (or perhaps his secondary ray was ray 2:-).”

You’re right Susan that Spock did not seem to have an obvious will-to-know because he did not display much emotion. On the other hand, a not so obvious desire for knowledge must have been there because he had so much of it. He even seemed to know more about earth history than earth people did.

It may be of interest to the group as we dabble in the Rays for me to give you my assessment of the rays governing the Star Trek cast.

Captain Kirk: The personality Ray governs what we see in a person on the surface and I would say that Kirk’s personality Ray is Ray 2 for he has wisdom and is intuitive.

I would also guess his soul ray is Ray 2

But the ray of his monad is on Ray 1. This gives him the amazing power to defeat his enemies even though he is a nice guy.

His mind is on Ray 4. This gives him his very creative thinking ability.

His emotional body is on Ray 6. This gives him a powerful ability to communicate emotionally when the need requires.

Most physical bodies are on Ray Seven.

I give Spock a second ray soul because he gives off the vibration of love and friendship much more than he wants us to believe. His soul seems to be wanting him to discover higher emotion.

I give him a 4th Ray emotional body because he is always struggling with the duality of his emotions.

I do not give the ray of the Monad for Spock and Bones for there is not enough information to accurately discern it. As much as they help Kirk overcome the bad guys, they could be Ray One also.

A reader who is not familiar with the Bailey writings expressed frustration in understanding the rays and wants a concrete method to discover them.

Yes, I realize we are jumping the gun a bit. On the other hand, I also realize that there are several AAB students here with some knowledge of the rays who may be willing to jump in.

You don’t need to know the exact date of birth, yet a knowledge of astrology is helpful in discovering your rays. The prominent color in your aura may indicate the ray of your astral body, but that is about it.

The only way to discover your Rays from higher vision is to examine the geometric shapes that are projected on the outer film of the aura and few people can see this and most psychics are unaware of its existence. The Masters can use this and other intuitive methods.

We ordinary folk must at first rely on our common sense and power of discernment.

George W. Bush is famous for adding the word “compassionate” to conservatism. This tells us that a certain ray is at play in his makeup. What is the ray and where is it working? On the other hand, he is working hard destroying our enemies at war. What Ray is at work here and where?

Clinton made many people feel that he was “feeling their pain.” Which Ray was at play here and where was it at play?

John Lennon is recognized as one of the most creative minds in history. What Ray was he focussed on and where was it working at – his mind, his soul or his personality?

He was very anti-establishment and anti-war. Which ray influenced this?