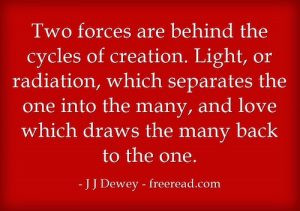 Question: “I would like to know how this effect of elevated energy levels (or radioactivity) in our various bodies (physical and otherwise) brings about these two initiations (transfiguration and resurrection)?”

There’s a lot of illusionary writing out there on the web about the increase of radioactivity and vibration preparing us to enter the 4th or 5th dimension. Then others are telling us we are already there but just don’t know it.

Djwhal Khul gives some hints about the effect of nuclear weapons: “Is the etheric web of the planet sufficiently stable and balanced so that it can adequately respond to the new and potent forces which could and will pour through it into objective expression? I would remind you that the release of atomic energy has had a far more potent effect in the etheric web than in the dense physical vehicle of the planet. Three times the atomic bomb was used, and that fact is itself significant. It was used twice in Japan, thereby disrupting the etheric web in what you erroneously call the Far East; it was used once in what is also universally called the Far West, and each time a great area of disruption was formed which will have future potent, and at present unsuspected, results.” Discipleship in the New Age, Vol 2, Page 61

Keep in mind that the etheric web produces the life of the planet as a whole and you and I are merely cells in the greater life. After DK wrote this many additional bombs were tested, much more powerful than the three he mentioned here. These great explosions created for the planet as a whole something similar to what a bee sting would be to an individual. Now some people can handle such a sting and shrug it off whereas others are greatly affected and live in terror of bees for the rest of their lives.

Even so, because most of the people on the earth are reactionary and emotionally grounded, rather than mental, the release of atomic explosion has caused a strong illogical repulsion toward anything nuclear. This has given rise to the emotionally based anti nuclear activists. This has caused a transference of fear of the atomic bomb to a fear of harmless nuclear energy, lumping them together under one roof because of the etheric influence on the emotional body.

The disturbance of the etheric web has had an opposite effect on the mental plane, however. On this plane there is no fear created, but instead has a stimulating influence on rational and creative thought.

Just as the atom was split in two, even so has the emotional plane and the mental been split into two camps. The majority of the earth are making decisions and conclusions based on raw emotion, whereas the other, a minority uses the mind.

It seems today to the thinking group that sometimes the effort to use the mind is futile, but the thinkers need to take heart as the power of the mind is to prevail over the lower emotions as we enter the age of Aquarius, an air sign. The next 150 years will make a huge difference if things go according to plan.

As far as the influence of atomic radiation on the initiations of transfiguration and resurrection goes it is not as direct type of influence. The whole thinking process of advanced humanity has been stimulated and this will push more people toward initiation. Even so, the radiation essential for these initiations comes from within and not from outside atomic radiation.

I understand a readers comments on words like “repent,” and “sin,” which are often associated with the likes of some half crazed fundamentalist preacher that we all want to run from.

But in the days of Jesus they were “cool” cutting edge words like “synergistic” and “paradigm shift” is today. This is because the meaning has been altered (or should I say obscured) today.

To sin means to “miss the mark” or to error and to “repent” meant to correct such an error in judgment.

A reader comments that her old black and white beliefs are being challenged here but does not want to replace them with new illusions.

I think most of us have gone through the pat answer syndrome at one time or another. The pat answer routine requires only acceptance and no thought about what is accepted. It was only through great struggle that I was able to free myself from this. It is especially difficult for Mormons because of the teachings of the unpardonable sin creates a great fear that must be neutralized. Of course the regular Christian belief of burning in hell for eternity is no small potatoes either – it’s just a little easier to shrug off because it is completely illogical.

Some Mormons I have taught have responded something like this.

“You may be right in all you say, but if there is even one chance in a million you are wrong then there would be a chance I could reign with the devil and his angels for eternity in outer darkness as a son of perdition. I’ll play it safe and follow the regular teachings.”

How did I overcome this dreaded thoughtform?

What kind of faith?

Faith in the love of God.

If God is truly Love then He/She/It will work with me, even if I am in error, as long as I am willing to follow the highest I know. If God is not willing to go this far with His children then we wouldn’t even want to return to Him would we? Who wants to live for eternity with any Being who is willing to condemn anyone to eternal pain for merely following what is seen as a harmless path that is seen as the best of all possible worlds?

Who wants to live with a God who would send Gandhi to hell for choosing the wrong version of theology?

The truth is that God is good and the eternal path of light is the path of dominating good.

Question: How can the sufferings and atonement be as orthodox teachings represent when many may suffer even as Christ???

The answer is simple: Just as we are capable of sharing the Sonship of God with Jesus even so are we are also capable of enduring the same sufferings he had – meaning that the infinite sufferings and atonement has a different meaning than most assume.