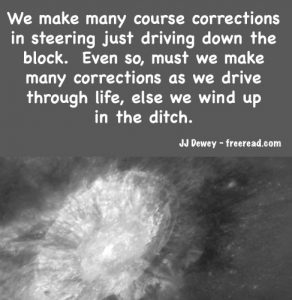 We have not covered principle nine yet of which we wrote:

(9) Another instrument of discovery of truth is the Process of Elimination. How do you suppose this principle works? Have you used it yourself to discover truth? Many of us have used this in the game “Twenty Questions.”

Remember the test I gave the group some time to guess which one digit number I was thinking of? Since no one was psychic enough to get it you had to use the process of elimination. The group assumed that there were ten one digit numbers that are 0123456789. After half of them were eliminated the group ceased using the guessed numbers as possibilities. Finally, there were two numbers left and then one. Surely the number left was it, but I still said no. None of the ten guessed was what I wrote down. The group went into deep meditation (a guess). Since there are ten one digit numbers and the group guessed them all and none of them was the number then the truth may not be as obvious as it seems. Could there be more than ten one digit numbers someone finally mused?

Finally someone used the process of elimination correctly and eliminated all positive numbers from the equation and realized that the answer could be a negative number. After the ten standard digits were eliminated you realized that there were nine negative digits that no one had considered yet. In other words, the process of elimination made you consider a possibility that you otherwise would have never looked at.

Finally, when you realized you were on the right track it was only a short time through the use of the process of elimination that the correct digit was picked. As I remember it was minus 2.

The interesting thing is that we have a number of psychics on the group, but as it turned out the process of elimination proved more reliable than ESP.

The truly accurate psychic is indeed a rare thing, but if we can, through the use of mind, logically eliminate certain items as false this leads us with great accuracy steps closer toward the truth. Any time the seeker has a chance to eliminate a piece of data as false he must rule it out no matter how much it goes against his belief system.

Any scientist who honestly uses the process of elimination must admit that there is a God, or at the least a higher intelligence than man. All he has to do is study the human cell and ask: Could this have been created with no guiding intelligence? Anyone using the process of elimination must admit that a creation a million times more complicated than the Mac I am staring at had to be created by some guiding hand or Purpose.

The atheist scientist illustrates one of the problems with this principle of truth. An item that must be eliminated from the equation can stare many of us in the face, yet we refuse to eliminate it.

If the prophet Rambalana takes his believers to a mountain top time after time to be picked up by Zor and his spaceship the time should come that the believer should eliminate Zor and Rambalana from the equation of truth.

The sad fact is that even when that which is obviously false appears the believer continues to believe instead of eliminate.

Take the Jehovah’s Witnesses for instance. One of the founders named Charles T. Russel predicted the return of Christ in the late 1800’s. When he didn’t show up he moved the date ahead. When he didn’t show up again the followers still did not use the process of elimination. Russel took advantage of that belief and moved the date ahead again to 1914.

Well, 1914 came and went but still no Jesus appearing in the clouds. Russel himself refused to eliminate this final date as being wrong and concluded that Jesus did come in 1914, but he just came invisibly and no one saw him. Thus, if I understand the current Jehovah’s Witness doctrine, they still to this day have not eliminated 1914 as the arrival date and accept this as the year of the coming of the Lord.

I personally grew up in an alcoholic family and pretty much fended for myself and my little sister as a kid. I eliminated my parent’s lifestyle as a desirable way of life and became active in the Mormon Church as a teenager. Then using this same process of elimination years later I eliminated certain practices within the church, such as strong infallible authority, as being anti spiritual and moved on to greater vistas of learning.