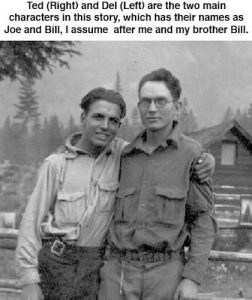 Most of this story is true, only the names have been changed. Many years after I made the tape recording of this great adventure, I dusted off my old typewriter and put it down in print. I would use the name Joe Parker, and my brother Dell, would be Bill.

It was the year of 1960. The new Pan-American highway was just being completed, opening up a whole new world to the people in this country. A place where the rivers had already produced many billions of dollars worth of gold, but had never been introduced to the modern dredge.

There should be millions left, we decided. We went down and made a deal with the Nicaraguan government. We would bring down a dredge and mine the gold, splitting the profits. My brother would go after the dredge while I stayed and searched for a rich gravel bar.

This is indeed a new and different world. A land of witchcraft, earthquakes, revolutions, and beautiful women.

In the city of Managua the girls outnumber the young men, twelve to one. The Army has taken the young single men.

We learned how to get acquainted with these beauties by just sitting in a sidewalk cafe, and watching them stroll by. If you see one you like, you give her a big smile. If she smiles back at you, she is yours.