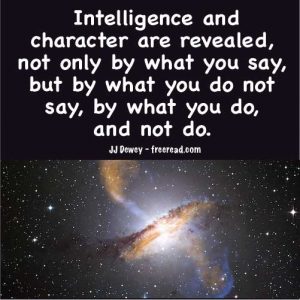 We each have one unit of energy and it’s important that we not deny these lower units. As soon as there is denial all sorts of problems are created. Denial is shown in handwriting. It’s shown in what we call retracing. A healthy M has no overlapping or retracing of the lines in the strokes. We have retracing when the line goes down and follows itself right back up. A lot of people are taught to write this way. People who write very neatly often retrace.

Audience: What about looping on the M?

JJ: Looping shows imagination. It shows expansion or an idea or thought. Any looping in any letter shows this. Depending on where the looping shows up demonstrates where the expansion is. For instance, a loop on a D shows expansion of critical thought. When people who have a loop in their small D’s are criticized that thought will expand in their mind. They’ll remember it being worse than the criticism actually was; the bigger the loop in the D, the bigger that expansion of critical thoughts. When you notice loops in someone’s D’s you need to be careful of how to talk with them.

You have three zones in handwriting. The middle shows social activities, the lower shows how you react on the material plane and the upper showing the spiritual abstract. The top loop on the L shows expansion of thought on the abstract. A big loop could show too much expansion where the average loop shows just enough abstraction. If there is no loop that would show a person similar to Spock. What he sees is what he gets.

Handwriting is one of the easiest ways to spot suppression. One of the troubles is, as we evolve, we tend to think we’re beyond this. “I’m beyond feeling this.” We enter a relationship and one person is letting their energies flow out to another person which may not be reciprocated and leaves you feeling possessive and jealous. Then the thought comes to you, “I’m an evolved person. I’m just as evolved as the next person and evolved people don’t feel this. They don’t feel jealousy.”

So you sweep it under the rug. As you do this you also end up suppressing the feeling. A person makes you angry but you think, “I shouldn’t be angry. I should be above being angry. I’m more evolved than this. I choose not to be angry at this person.” It doesn’t matter what you choose in that regard if your solar plexus is affected. You have maybe 70-80% of that energy floating around in there, circulating. Now that energy has been disturbed and you’re telling that energy that it’s not really there.

This energy is composed of lower life forms. “You’re telling me I’m not here?” they say, “I’m telling you otherwise. I am here.”

You need to remember that your being is composed of millions of smaller life forms. These lives gather together to create larger lives. Our centers are our greatest life forms outside our composite selves.

So you tell your solar plexus center that it isn’t there and it makes it clear that it is there, and you’ll find this out. It keeps things in motion. You’re offended again and pretend you aren’t really offended. It happens a third time and this solar plexus center, looking at the entity, says, “I’ll show him!”

If you follow the third path the solar plexus center is happy because it’s been acknowledged. The feelings are really there and under control now. You feel better and the other person has to deal with that negativity now. He has to either deal with it or let it pass on through him. If he acts incorrectly then he will need to deal with that energy. But if they both are forgiving and by the power of forgiveness let the energy dissipate then no feelings are hurt and all will be well.

So, two people with romantic energy have one unit. To keep that one unit within themselves they need to keep balance of the lower centers. The lower centers are extremely important because they are the energy of our lower world and our personality worlds are important. They are the first steps of the ladder that take us to the spiritual world. If we aren’t taking care of the lower parts of ourselves then the higher parts of ourselves won’t open the door to let us in. If we don’t nurture and take care of and direct intelligently the lower parts of ourselves, which are actually composed of living entities that need nurtured, the door to the higher self will remain closed.

Audience: JJ, what if we decide we don’t want to do that and prefer to live by ourselves?

JJ: If you’re not in a romantic relationship then there’s no problem with this type of energy. You’ve got one unit of romantic energy but it remains within yourself. There is only a problem when you begin a romantic relationship then all sorts of complexities enter in. Several people here are single so I’m glad you asked that. A lot of single people go in and out of relationships. I know several people here are headed in that direction right now. (laughter)

A lot of people are content being single. Maybe in your last life you consummated a relationship and decided you wanted to rest from relationships this life. That can happen. You might have decided to spend this life single. There is nothing wrong with that at all. There is nothing wrong with anything as long as you are following the direction your soul leads you. If you’re leading a single life and you’re comfortable and you feel that’s fine with your soul then you retain that one unit of romantic energy and it resides within you.

Audience: Couldn’t she also have her lower chakras open and still be passionate?

JJ: Yes, she can still be passionate. This has nothing to do with whether or not she’s passionate as far as how she uses her romantic energy.

Audience: So where is the romantic energy? Isn’t it in the sacral chakra?

JJ: It’s controlled by the solar plexus. You have 10 petals in the solar plexus. These different petals form what is called a lotus in the east. These unfold like lotuses. It’s like a flower unfolding. Each petal controls a different type of energy.

JJ: Yes, that’s 20% going off into space so you feel a vacuum because you aren’t receiving back what you’re sending. It leaves an emptiness. The more the imbalance increases the more emptiness is felt. In many ways a single person is in a good situation because they can be content with 100% of their solar plexus energy circulating within himself. It’s when the energy is pulled upon by another that restlessness begins.

Let’s say some guy moves in next door to a single content female. This guy is a totally dynamic person. He stimulates her like crazy and she says, “Wow, I never met a guy like this before.” All of a sudden it sucks some energy right out of her and the energy begins to circulate. Now she’s faced with a decision of letting more energy out and taking a chance. If she takes a chance she lets the energy circulate. If she hasn’t let any out in awhile it could be fairly scary. Maybe she’s led a very stable life and now tremendous instability is very possible. She would probably say, “I don’t know if I want this or not. This is a big decision.” For someone else who may have a new relationship every month it’s no big deal. (laughter)