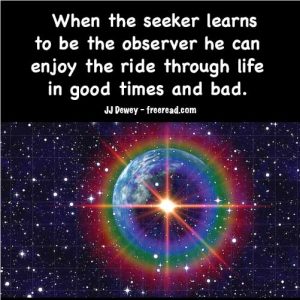 Question: Could you clarify how the male and female energies achieve balance in higher lives such as the Masters?

Balancing the energies within you is a different thing from the energies in circulation within the physical, astral and mental worlds wherein there is form. Wherever there is form there is not a balance of energy because form is created by energy being out of balance. If all the male/female energies in your body were to suddenly be in perfect balance your body would instantly disappear no more to be found. All creation of form takes place through matter leaning to either the male or female energy, or polarization in one or the other.

When a Master achieves balance he does not end the polarization of the energy, but places his consciousness in the higher planes where polarization, as we see it, does not exist. He could theretofore be operating in a vehicle of strong polarization, either male or female, yet not be controlled by it because his focus of consciousness is in the formless worlds. He has just enough focus in the physical to function here.

We can see this principle at work to a lesser degree with geniuses in our history. Many of them are absent-minded because their focus is elsewhere. Einstein was so focused on the abstract that when he took a walk he often got lost and had difficulty in finding his way home.

I don’t claim to be a genius, but you can ask my wife about my difficulty in keeping my mind on driving, chores, or whatever in the mundane world.

Djwhal Khul tells us that the Masters are not looking forward to working directly again with humanity because it will be very painful for them to focus enough to function efficiently here. This out-of-balance male/female energy we have in the human kingdom is one of the main reasons for this.

Question: “Does he (a Master) receive an equal “fullness” from functioning in either energy?”

Whereas the humans function mainly in the astral (emotional) and physical, the Master functions mainly in the mental and spiritual. Therefore, the use of the male/female energies is largely mental. This would entail the giving (male) and receiving (female) of intelligence.

Before the Ancient of Days came to the earth he was polarized in female energy as a disciple of the Solar Logos. But now he is here he is polarized as male or a sender for the whole planet.

Question: Earlier you taught about the two paths. One is the spiritual which requires that we go against the flow and the material were we go with the flow. How do they fit in with the flow of male and female energies?

There is a time to go with the current of strongest energy and there is a time (or place) to go the path of highest resistance. The two paths you mentioned are the spiritual and material. Because the material flow is by far the most powerful, the only way to ascend to the spiritual path is to go against the material pull. One must follow the still small voice rather than the noisy crowd.

This is a different situation than dealing with male and female energy for the two are at play on both the material and the spiritual path.

A Master overcomes all things by finding the dominate energy, cycle, or point in the Will of God and going with its flow and assisting the completion of the cycle. Riding the male or female cycle assists in the fulfillment of the will of God and is associated with the Spiritual and not the material Purpose.

Question: If a Master came to this group would he be welcome, or would he throw off the balance of energy?

Thus, by understanding and working with the flow of male/female energies they keep their molecules in working order.

If a master were to join a molecule with us on the physical plane he would still have to work with sending/receiving energies just like the rest of us. A master would help, not hinder the balance, providing he was accepted by the group.

A person becomes a Master because he understands the energies and directs them to the desired end in connection with the Will of God. He does not become a Master because his energies are neutral. If zero is neutral and five is the highest in male or female polarization, the Master is capable of being a five in polarization of energies flowing through the physical, yet directing those energies toward the desired end. His last life before obtaining Mastery is usually as a strong male so he has greater power to send forth his revelation. He is able to do this wisely because his vantage point is from the viewpoint of the observer from the neutral spiritual world.

You are not your car, but you have power to press the throttle and direct it to where you want to go. The Master knows he is not his sex, but he uses sending/receiving energy to obtain the desired result.

After the person has become a Master he can choose mortal incarnation a number of times again if he desires and if a female cycle is more advantageous he can choose this.

Christ could choose to come as a female. If he did he would be overshadowed by the Ancient of Days and speak as a receiver of one higher than himself.

Jesus spoke for one higher in his life in Palestine, but had to come as a male because a female messiah had no chance of being accepted. But he used his male polarization to start a missionary (sending) church… “go ye therefore and teach all nations.”

Question: As I understand it, members of a human molecule will be at all levels of progression, so the molecule could be composed of all kinds of atoms. How is this going to work out? Can we all just get along?

My book covers a lot of this. It will take a lot of gathering and sifting to create the first molecules, but after they are established extension will be much easier. People at various levels of spiritual evolution are capable of group soul contact if they can merely look past the personality and see the Christ in other group members.

All seekers must learn how to overlook personality flaws and be more inclusive and accepting of their brethren and sisters. This is actually as much of a science as it is an art on which we will put much attention.