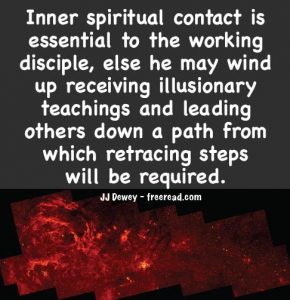 A reader makes a good point when she says: “I would have thought you could say any illusion has missing or hidden pieces as isn’t all illusion a result of skewed vision?”

Yes, in every illusion has as part of its cause – a truth or piece of the puzzle which is hidden, or not seen, or the pieces not arranged properly.

Let us say you are putting together a puzzle of a 1000 pieces and only one piece has red in it. You have all the pieces together except the one red one. A friend looks at the picture created and comments – the picture has all the colors represented but no red.

The friend is a victim of illusion because the picture his viewing is missing the red piece. The only way he can overcome the illusion is to find the truth, that the final piece is red. Until he discovers this the illusion that the whole picture has no red will have power over him.

Until he finds the final piece what can he do to minimize the illusion?

The important point is that he must not assume the final piece contains no red. He must remain open to all possibilities. The person who is truly immersed in illusion will maintain a preconceived notion as to the image of the last piece. He who makes such an assumption is fully enslaved by the illusion.

In our reality there is rarely only one missing piece but a number of them and there is not one puzzle but layers of them. To overcome all things the pieces must be found and seen and the layers must all overlap and fit.

Why is death the last illusion? Because all other illusions must be seen and solved before this last illusion can be properly seen. There are a number of pictures that must first be seen before the big picture can be understood. Therefore, to attempt to overcome death before the preliminary pictures are put together would be a fruitless effort.

This same principle applies to many illusions that face us. We have heard that A, B and C are illusions, but we may be a long way from understanding the whole picture which will reveal the truth so the illusion can be understood and dissipated as the morning sun evaporates the fog.

That said, let us dispel one more illusion. Let us examine the “Peace at any price,” deception.

It is true that those who buy into this have pieces to the puzzle missing, but what are the pieces?

Here are pieces that need to be considered:

(1) Suppressed hatred and differences are not a sign of true peace. Tyrants establish illusionary peace when they are in power because people are afraid to speak up.

(2) It is not worth the risk to escape a little pain now at the risk of great pain and destruction later.

This illusionary step to achieve peace was the cause of World War II. Europe did not suffer a small pain to stop Hitler when it would have been easy and instead suffered great pain for their mistake. The temporary peace was not worth it.

(3) Many think that death is the worst thing that can happen to us.

The truth is that loss of liberty is worse than the loss of life due to a just war. A war that ends suffering and frees the human soul is justified.

Now we must realize that just as some are against war because of illusion there are times that nations are deceived in going to war through illusion.

Explain how illusion can lead to an unjustified war.

JJ: When I refer to the picture I am talking about the complete picture, not the picture missing a piece or pieces. Both the friend and the person with the puzzle realize this. The friend is assuming with surety that the final piece will have no red because all appearances point that direction. This assumption that you know what is in the missing pieces reveals the principle wherein illusion lies.

Those who are in glamour but not yet able to even see or comprehend illusion will look at the incomplete picture and not question whether it is complete or not but just seek to enjoy and benefit from what they see.

Those who are able to approach illusion, yet trapped in it will question the completeness of the picture, but have wrong assumptions concerning the missing pieces or even be unaware of how many missing pieces there are.

I usually reject posts containing hate Bush talk or against anyone else, but since we are on the topic of illusion and there are so many of these floating around the internet I thought I would let this through for entertainment value.

Let us examine this post which is embedded with illusion and glamour by one who calls himself Elijah.

Elijah: The greatest holocaust ever is near to start in the near future in America by this evil Illuminati-led government under Adolf George Bush now. Every day the writings of Mein Kampf that Hitler used is being implemented in America which in general is asleep as to what is happening. This Homeland Security is liken to Adolf Hitler’s Gestapo in all its secret doings all over the country. After having done away with the Constitution of America and its Bill of rights, America is under U.N. mandate laws that now govern this land that used to be free.

JJ: There is so much illusion and deception in this paragraph that it makes your head spin.

It was only weeks after Hitler assumed office that his Gestapo forces were sifting out citizens in each neighborhood and torturing them on their front laws to put the fear of God in the hearts of all the German people who may consider speaking out.

The Homeland security is nothing like anything Hitler had and Hitler would have never waited three years to enslave his country.

I don’t think this guy has read Mein Kampf or the history of Hitler’s Germany or he would feel foolish making such comparisons. He has many missing pieces of information here making him subject to many illusions.

Elijah: George Bush has ordered 100,000 big white boxcars with shackles in them to gather and hold those resistors to their dictatorship. It is being implemented to force all people to accept this Biochip with the Mark of their beast and his name and number in it. If you resist, then you go to the termination building. You go in one door and come out another door as ash. It is liken to Hitler’s Germany, but this time it will be for resisting Christians and all Jewish people whose names they have placed on their list for extermination. The rest of the masses will be herded around like slaves as in Adolf Hitler’s time, or even as the Russian people who were not Communists.

JJ: It is amazing that anyone can believe this nonsense. I have heard stories like this circulated about every president in office for over 30 years. People are always supposed to be rounded up any day, but nothing ever happens.

A dictatorship could happen here or anywhere else if we are not diligent, but it will not happen under George W. Bush. There is always a possibility that a great crisis could force us to take drastic measures as happened in the Civil War and World War II. Consider that during the Civil War many accused Lincoln of being a tyrant and many pacifists during World War II thought the United States was as much at fault as Germany. This thinking was based on illusion.

Elijah: In America today they have slave labour camps already built to hold men, women, and children as Adolf Hitler had. There is a big one in Alaska which can hold many thousands of persons, all divided up for men, women and children. All this goes on while the American people have been asleep in their prosperous lives. But their day will come when in order to hold onto what they have gathered, they will have to accept the mark of the beast, his name, and his number 6-6-6 in a biochip implant, or off they go into one of these 100,000 big white boxcars with shackles in them all done by this so-called Christian President George Bush.

JJ: Again, I have heard this thrown around for over 30 years. Those boxcars must be rusting by now and the slave labor camps must be in need of repair through lack of use.

Elijah: Oh wake up, people of America that used to be free. You have been had by this Skull and Bones member who drinks human blood to a giant stone owl god named Molech at Bohemian Grove in California, where most of our high government officials go to as Illuminati Masonic Satanists that they are.

JJ: There’s no evidence (that I have seen) that George W,. Bush ever attended the Bohemian Grove. The stories I have read about this are written to make these gatherings sound as sinister as possible. From what I can gather it is like a fraternal organization but this is the first I have heard of the blood drinking accusation.

During the dark ages those clothed in darkness accused the Jews of drinking the blood of Christians. This gave them the excuse to persecute and kill many thousands of them. This blood drinking accusation is an old trick of the Dark Brothers.

A reader mentions that Elijah has made prophesies that did not come true. Why am I not surprised? Elijah wins the prize for the illusionary post of the month.

I know of no higher fortitude than stubbornness in the face of overwhelming odds.