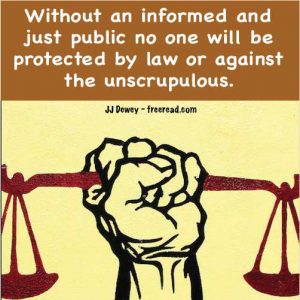 Question (from previous post): Can you think of two other laws that will be essential to insure a new age of peace?

To this the comments were directed toward law supporting increased access to education and more democracy.

Increased universal education is fine if it does not require more restrictive taxes and tax laws to accomplish this, As we approach the new age we will see more and more education available for free. This will be increasingly available over the Internet and through community education classes that are reasonable enough in cost to be available to all.

Even though teachers will never be replaced, computers will become great substitutes and anyone with initiative who does not have access to a live teacher will be able to learn most anything he needs through virtual classes much more sophisticated than we presently have. (written in December 2000)

I do not know if one can increase public involvement through law, but this certainly needs to be taught and encouraged in the new age.

Comment: “One thing I can think of is there’d have to be a law regarding nuclear waste, we just can’t expect mother nature to tolerate us sweeping our crap under her carpet.”

JJ: Actually the are laws concerning this already, but many complain they do not provide enough protection.

The reader is headed in the right direction. There will eventually be universal laws accepted by all the nations which will help protect the health of the planet and bring the human race in balance with the needs of the planet.

The problem we have now is that both extremes are being played out. One extreme wants to proceed with things as they are and continue polluting as if there is no tomorrow.

On the other side are the extreme environmentalists that want restrictive laws in accordance with their religious type beliefs, many of them not having a benefit for either business or environment.

“Recognize the problem so it can be solved.”

Both sides are guilty of not recognizing the real problem.

What is the problem then?

Answer: Here is what I consider to be the major one.

On the side of the environmentalists is that they expect to decree the language and method of enforcing laws protecting their version of the environment. Many of their demands have been made into law, to the distress and outright anger of many businesspeople.

This creates a problem of laws being passed to restrict a large group of people who have had little or no input in the making of the law. Laws for businesses should not be made by those who do not understand business. Neither should laws concerning the environment be the exclusive territory of those only interested in making money.

Environmentalists also seek to pass laws based on morality that wind up hurting both the environment and business.

For instance, here in Idaho and other Western States environmentalists have pushed laws through which have restricted road building and logging of any kind in wilderness and other areas where we have potential trees for lumber.

Here is the effect of these do-gooders.

First there has been a tremendous loss of jobs creating intense hardship for many people – many of whom I have personally met and talked to.

Secondly, Boise Cascade and other companies dealing with wood products are switching many of their operations to Mexico and other third world nations where the pollution and other dangers to the earth will suffer a tremendous increase.

So the environmentalists are getting their way here in Idaho while being the cause of increased pollution and the cutting of trees and rainforests in other parts of the earth.

You may have seen on the news about the great forest fires we have had in Idaho and other western states – the worst in this century. This has not only destroyed many more trees than any logging has ever done, but has destroyed many animals along with their homes and food supply.

Such terrible destruction by fire did not just happen, but has two major causes that could have been easily prevented.

The first is the shutting down of access and road building which would provide more access for forest maintenance and fire fighting.

The second is that after several years of no logging to thin the forests the trees have grown so close together along with natural debris which produces a tremendous fire hazard that when we were faced with a dryer than normal season there was produced a great disaster.

The environmentalists have such a religious fervor against business and logging that they are even against any commercial interests going in and cleaning up the dead wood caused by the fires because they think that man is not nature and that no business should make any money from trees period.

If we would have had reasonable cooperation between environmentalists and business then most of these fires you read about could have been prevented, jobs would not have been lost, tourism would not have been destroyed and our forests would not look like they have been hit with a nuclear bomb. In addition to this there would be less need to go to the third world to harvest their trees.

What must happen in the new age is that both business and environmentalism must work together and business must have a voice in laws that are written which will govern their destiny. Pressure must be put on business to recycle and not pollute the earth, but if they are allowed to participate in a solution which strongly affects them, then business can live in harmony with nature.

A business cannot exist without public support and the best way to cause business to police themselves is by education through the media and exposing businesses which pollute and threaten the earth. There is also much that can be done through intelligent rules which will encourage more recycling which will make it much easier to live in balance with nature. Time does not allow me time to expand at present.

Another reader hits upon a third area where intelligent rules may offer assistance. He says:

“Something along the lines of Americas “Bill of Rights” which would guarantee some minimal standard of inalienable human rights that all nations need respect.”

Question: What kind of rules or laws could be written to accomplish this?