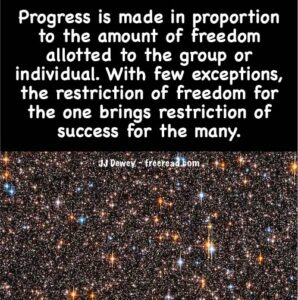 JJ: They are tiny lives interplaying between spirit and matter. Everything in the microcosm has already reached the end of its evolution so they’re almost like little computer programs where their consciousness is shifted up to us where we are the new creators allowing the lower to share consciousness with us. The soul between spirit and matter in us is an interplay of life-forms through which the Solar Angel works. This is an actual being that has evolved on another solar system that has long since passed away.

Let’s get back to the gathering. The third step was the evolution of a democratic society, the capitalistic system, free enterprise – freedom is the key word among the third great step in evolution. What’s the key word for the next step?

JJ: Think of the Aquarian Age. For the gathering, what will be the keynote do you think? Yes, cooperation.

Cooperation is the keyword for the next step.

JJ: Yes, it is. Those who are now sold on free enterprise, capitalistic system and democracy really value their freedom. They will have a fear of losing their freedom as we switch to a cooperative system because they compare the cooperative system with Stalinist communism. We look at communism and think it was bad. What is wrong with communism as it was practiced by the old Soviet Union and the Chinese Empire today? Right, limited free will. They see a concept that they think is good and they’re trying to implement it by force. This method is always a source of evil.

Evil is created when you see something that is good and you try to implement it by force. Matter of fact, nobody thinks they are evil, even Hitler. Hitler saw something he thought was good and he tried implementing it by force. He thought he knew what was good better than anyone else did so he thought, “I’m going to do the greater good and the only way to get this good out there is to force people to do good.”

This is always the source of evil in our current society. Back thousands of years ago this was sometimes good because the mentality of the people didn’t understand freedom, so this type of government was actually the highest good in certain times of our history. Maybe thousands of years ago Hitler could’ve been seen as a good guy. Maybe he would’ve been the best they had, but not today. Not today, because people understand the principle of freedom. When you understand the principle of freedom you do not want someone, some do-gooder, forcing you to do good. The evil that comes out of forcing others to do good is much more powerful than any good that transpires by being forced to do good.

When the Soviet Union tried to force people to do good, the leaders were thinking that because theirs was the best system, forcing people to do what is right would insure they’d have the greatest productivity. But did they? They weren’t able to feed themselves. They were starving to death. We had to keep giving them grain. Even though they were our enemy we fed them half the time. Nobody had incentive to work because, “We’ll have the other guy work. Why should I work? I don’t get any more benefit if I work hard than if I don’t work hard.”

Audience: I was wondering about kibbutz. It’s a way of life.

JJ: How much of Israel? They have a community living type arrangement where everyone has to cooperate?

Assaf: I was born in a kibbutz and grew up there.

JJ: Do they have much incentive in that system? This is always the case. When you’re in a system where you’re forced to do good, incentive disappears because you’re only incentive then is to get out of being forced to good. It’s like a teen-ager. If you try to force them to be good they rebel. The best thing to do with a teen or a human being is to dangle a carrot in front of him then he’ll be much more motivated.

Now, just because they were trying to force people to do good, and it failed, does that mean that everything in a communistic society would be evil? What if we had a society that was free and motivated, yet we also had a sharing principle of some type at work? There’d be no poor. This is what the scripture says about Zion and also about the early Christians. It said in the Book of Acts  that each person gave everything they had to the church and they shared it and there was a cooperation. Then about Zion it said there were no poor among them, that everyone was taken care of. How did that work? The people were not forced to do good but some type of system was put into play where there was enough motivation that abundance was created and freely shared.

JJ: Yes. On the other hand, the early Mormon as well as different religious communities have tried to get a communal thing going, as well as the early hippies. They all fizzled out. None of them worked. The early Mormons were sincere about trying to follow the principles in the scriptures. But there was always some powerful authority that rose up and started dictating to everyone what to do. They’d have to do it his way or be punished or thrown out. Pretty soon the motivation all went downhill.

Audience: There was an honor system . . because one of the people in Peter said you have lied to the Holy Ghost after they gave a portion of their goods. They did not give what they should’ve.

JJ: That was a fairly small group and it worked for a while. They gave what they had and they shared it. What we’re doing now is we are evolving to a higher system. How are we evolving? What signs have we seen of cooperation at play in our evolving society?

Audience: Workers own share in the company in which they work. Audience: How about free trade?

JJ: The companies are sharing more. It used to be that companies never bought health care for their employees. Now they’re buying health care and giving them sick pay, unemployment insurance.

Audience: That’s because they’re forced to. It’s a requirement. It isn’t that they want to.

JJ: They’re doing a lot through their free will also. Some things are forced by the government then it takes government assistance to make it work. The things the businesses do on their own like WINCO groceries in Boise is completely owner operated and owned. Every employee is an owner to some degree. It works really well. They have the best prices in town and really good service and products. Many businesses are voluntarily giving stock options to people. The business world is evolving into a more cooperative society, without force. If the government will stay off their backs and help them and allow them to evolve, we’ll see businesses evolve into what Karl Marx dreamed about, except without the use of force. Every man will have according to his needs. It’s a nice slogan but it didn’t work the way they wanted it to when implementing it by force.

One of the problems we have in our evolution is that the old ways are always fighting the new ways and you can’t put new wine in old bottles. Our society, as it is, will evolve up to a certain extent. It’s evolving up to where companies are becoming more cooperative and sharing more with their employees, but there are a lot of things that aren’t changing. For great change to be made there has to be a gathering. Another gathering has to happen-the fourth gathering.