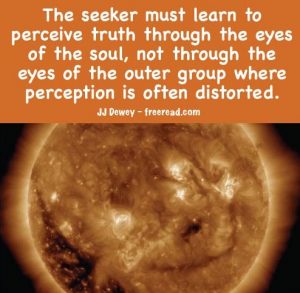 Freedom and the Right Hand Path

Can you name some freedoms on both sides of the pendulum that those in illusion wish to restrict? What is the only reason that freedom should ever be restricted?

I thought Glenys gave a good answer to this. Let me quote:

“Both conservative and liberals deny freedom of choice in one way or another eg the conservative’s commitment to tradition and the liberal’s commitment to the power of the state (depending on which branch of ‘liberalism’ is practiced). Throughout history, freedom of religion and self-determination have been sacrificed by people who describe themselves as being one or the other. Both look to eternal sources for answers to life and purport to know what’s best for the individual, going so far as to devise severe penalties for those who choose to control their own lives and destinies.”

A reader mentioned that we only seem to have a blind spot when one eye is shut and that it seems to go away when both eyes are open. It is an interesting correspondence that the left eye is male-conservative-logical and the right eye is female-liberal-emotional. In other words, we can greatly eliminate the effects of the blind spot by balancing the male-conservative-logical and female-liberal-emotional energies within us.

Those who have a mindset on either the conservative or liberal side will have a blind spot and be out of balance in their total vision. Hence they will feel justified in restricting the freedoms of those on the other side of the pendulum.

Let us bring this home with specific examples.

(1) Abortion is a great example. Liberals claim conservatives are seeking to restrict their freedom over their own bodies.

On the other hand, conservatives claim liberals are seeking to totally eliminate the freedom of the unborn child.

Who is really seeking to take away freedom, or are they both in the wrong?

(2) Liberals claim that freedom is increased through expensive social programs. Those who receive the money have more freedom because of more access.

Conservatives claim that freedom is decreased because the State takes by force from some and gives it to others. Those who have money taken from them lose freedom.

Who is correct, or are they both wrong?

(3) Liberals support free speech in most creative endeavors even if it distorts and makes fun of God and Jesus. They support the right to say any number of cuss words, sex and violence from Hollywood and insulting opposing views with threatening or guttural language.

In this area conservatives take a stand and say we should restrict some freedom of speech in these areas.

On the other hand, conservatives support free speech in areas considered politically incorrect by the liberals. They think it is ridiculous that anyone should be offended by a name like “Washington Redskins.” They do not like being restricted to the word “person” instead of “him” or “he” and want the freedom to continue to use the word MANkind as a designating word for the race. They want the freedom tell jokes about Italians or Mexicans if they want.

Again, who has the right idea in the restriction of freedom?

(4) The liberal thinks we should correct our children with kindness on the physical level – that kids should have freedom from fear of spanking.

Many conservatives believe they should have the freedom to spank their kids when necessary.

Now earlier someone mentioned that they thought that most of the people in the group have chosen the path of light, but before the final choice can be made the principle of freedom must be correctly understood.

My guess would be that in these three areas that part of the group would identify with the conservative idea of restricting freedom and part with the liberal side.

Hopefully we have illustrated here that the choice between light and dark is not that simple. If we make a wrong choice for the restriction of freedom now it will be very difficult to change directions in the future.

The dark side is not entered in one giant step or decision, but is preceded my hundreds of small wrong illusionary decisions that later have to be undone with steps retraced if we are to make the correct choice in the end.

When we do make a wrong decision concerning freedom what do you suppose our soul does for us later in life (or a future one) to help us back on the path?

The Reason to Restrict Freedoms

Travis gave a good answer on this:

“It should all come down to one simple question: Did the action in question cause measurable damage to the victim?”

You seem to be headed in the right direction with your answer. The trouble is that even if you or I were king of the world and had a responsibility to write the criteria for the restriction of freedom it still would be misinterpreted by future generations no matter how clear and accurate the presentation was.

The reason is that it takes a certain degree of soul contact to obtain a sense of the true principle of freedom. Therefore the best we can do as teachers is to present the principle as clear as word can be and attempt to inspire others to throw the principle of freedom across the soul so the desire for maximum freedom of spirit will burn in the hearts of the sons and daughters of this little planet.

The greatest temptation placed before us humans to assist the Dark Brothers is to get caught in the illusion that “to accomplish good, we must participate in an evil to remove freedom, for the trade off seems good.”

This was what happened with communism. They had a great goal – equality and abundance for all, but they made the mistake of seeking this goal by forcibly removing the freedoms of the people. As a result in the end (in the USSR for example) they had neither equality or abundance.

Remember our discussions about the Beast in the beginning of our group? Some wondered why we spent so much time on that subject, but it is extremely important to understand that the Beast represents a strong authority figure that we either give our freedoms to or it takes them from us “for our own good.”

The only freedom that should be restricted are actions that take away more freedom or rights of the group or individuals than is added.

We restrict the freedom of the thief to rob others because this action takes away more freedom than it adds.

Overall we may define the principle of freedom as follows:

“Those actions and laws lie within the principle of Freedom that bring greater freedom for and amplify the power of DECISION making for the group and individual.

“The actions and laws that lie outside the Principle of Freedom are those that bring less freedom for and diminish the power of DECISION making for the group and individual.

“To diminish freedom so that good may come is illusion and the foundation of great evil.

“To allow freedom so that both good and evil is possible is the path of light for when freedom reigns the illusion of evil is eventually seen and dispelled and the power to BECOME and evolve is amplified.”

The decision between the two paths is not a decision between blissful love and demonic madness. If that were all it is then all would choose the path of light. Instead many are deceived into a dangerous heading toward the dark path because they believe they are choosing love.

In our last post we gave five examples of possible distortions of freedom. Try and apply the principle of freedom to discover the true course to take to solve these problems.