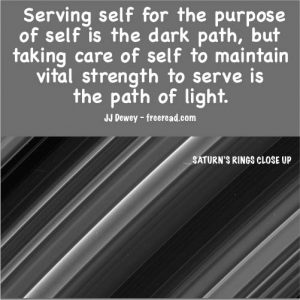 Fate of the Dark Brother

A reader is basically asking us why it seems to appear that those who are selfish and choose the dark path seem to suffer less than those who are struggling to move toward the light. The answer is quite simple. Taken as a whole, the Dark Brothers suffer much more. No one escapes the law of cause and effect – not the Dark Brothers, not the average person and not even the Masters.

A misunderstanding may have occurred because I have written that many of those seeking the path of light often suffer because of guilt and such guilt can not only cause great emotional distress, but is also the cause of many illnesses and much physical suffering.

There are two groups who do not suffer the harmful effects of guilt. The first are those who have made significant progress upon the Right Hand Path of light and love. These individuals see that guilt is caused by illusion, and because they understand the illusion, the negative aspects of guilt have no power over them. This is a great aid to them in maintaining reasonable physical health. Even so, there are other factors that must still be mastered for optimum health.

Does this mean that such a seeker who has transcended guilt has no conscience?

Guilt is not the result of a violation of conscience, but the offending of a false ego which seeks to deceive in the darkness of an unilluminated mind.

True conscience from the Holy Spirit does not punish, but seeks to correct through the law of love.

The second group who has no guilt is composed of those workers of darkness who have made considerable progress along the Left Hand Path.

These do not have guilt because of any light received or transcendence, but because they have severed their ties with their own souls. Consequently, they have no conscience or guilt.

These are they spoken of by Paul, “Now the Spirit speaketh expressly, that in the latter times some shall depart from the faith, giving heed to seducing spirits, and doctrines of devils; Speaking lies in hypocrisy; having their conscience seared with a hot iron.” I Tim 4:1-2

Those who have their conscience seared with a hot iron have one advantage over their brothers. They have no guilt. But they have not solved the problem of guilt or transcended it; instead, they have suppressed it only to have to deal with it another day.

Consequently, these wayward souls do escape some of the health consequences of guilt, but they have others to deal with.

DK writes that “he stands in danger of obsession, insanity, physical death, or of dire disease in some part of his body.”

“If a man persists from life to life in this line of action, if he neglects his spiritual development and concentrates on intellectual effort turned to the manipulation of matter for selfish ends, if he continues this in spite of the promptings of his inner self, and in spite of the warnings that may reach him from Those who watch, and if this is carried on for a long period he may bring upon himself a destruction that is final for this manvantara or cycle. He may, by the uniting of the two fires of matter and the dual expression of mental fire, succeed in the complete destruction of the physical permanent atom, and thereby sever his connection with the higher self for aeons of time.” Treatise on Cosmic Fire Pg 127

You might note that in the book Philo is not in very good shape for he is in a coma.

The dark brothers ignore great pain sent as a correction before their connection with the soul is severed. After this severing takes place, he has tremendous suffering to face as he then heads toward disintegration and death of all that he has worked millions of years to achieve. He thinks this can be avoided and his selfish desires fulfilled, but in this he is deceived.

Then, after his cosmic death, he must wait billions of years until the creation of a new solar system before he gets another chance. And here he must again undergo tremendous suffering over a thousand or more lives as he attempts again to work toward liberation.

Overall, there is nothing in the fate of the Dark Brother which is to be desired or envied.

Color and the Centers

In my crystal booklet it says the colours of the Chakras.

JJ: It is assumed by many students that the colors of the centers follow the sequence of colors in the rainbow or a prism, but such is not the case.

Here are the colors of the centers as given by DK:

Crown = The major petals in the head are gold and blue

Third Eye = This is composed of two large petals of 48 each. Half are rose and yellow and the other half are blue and purple

Base of Spine =- Orange fire

He doesn’t give the color of the sacral center for some reason, but it is mostly governed by ray seven which is represented by the esoteric color of violet and the exoteric color or white. He tells us that this center corresponds to the Sun within us. Now, the sun gives off a basic white light with a twinge of yellow so perhaps this is the dominate color of this center.

Another thing to keep in mind is that the centers will change somewhat in color as they open up as the person evolves.

Question: JJ, you have solid soul contact and are in touch with the Oneness Principle, and yet, to my knowledge I haven’t heard you talk about being in one of these groups or Ashrams? Or are you with an Ashram, and thus, have more contact through your soul with the Ashram and the Masters and the Oneness Principle?

JJ: For the purpose of this group it matters not which master to which any disciple is linked. There have been so many glamours associated with the masters in the past that at this time the less said about it the better. If it is important for anyone to know they can seek their own answer through prayer or meditation. If it is helpful for them to know then it will be revealed.

Each disciple in any life undergoes a great search and undergoes a dark night which is then followed by contact of some type with his group where he settles down in consciousness merged with his group mind through the Oneness Principle.

The time will soon come when exoteric ashrams called molecules will be created on the physical plane having a tighter soul connection than has appeared on the earth for many years and will take root into permanent manifestation.

“May the road rise to meet you, May the wind be always at your back, May the sun shine warm upon your face, the rains fall soft upon your fields and, until we meet again may god hold you in the palm of his hand.” Unknown