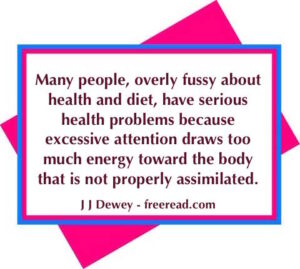 Diet, the Song and Controversy

A reader who was not a vegetarian wanted to know if she was missing out on her spiritual evolution because of this quote from DK:

“Only those who have been for ten years strict vegetarians can work thus in what might be called the “record aspect of the astral light.” When they add to their purified astral and physical bodies the light of reason and illumination of the focused mind (which is very rarely found), then they become accurate interpreters of astral phenomena.” Esoteric Psychology, Vol 1, Page 241

JJ: One has to approach a very refined state to accurately see the astral light as well as mental thought forms. Very few people can do this, even vegetarians.

Now keep in mind that attaining this ability to see phenomena is not a sure sign of high evolution, but many of those highly evolved who can see such things are also vegetarians. Vegetarianism assists in the seeing more than normal vision for diet can increase sensitivity, but not wisdom or common sense.

I learned to see auras and had some success in seeing thought forms when I was on a strict vegetarian diet. I now eat meat but have retained most of my abilities, but they have not increased since I chose a heavier diet.

I found I was too spiritually centered on a vegetarian diet and decided I needed to become more grounded and switched to eating meat. I may switch back later, pending the guidance I get from my soul.

There have been great and advanced souls come to the earth who have eaten meat and others who are vegetarians. Both paths have their advantages. The vegetarian has an increase of sensitivity to the higher senses. The meat eater often develops greater common sense in dealing with real world issues and can go full steam ahead in developing the mind and the intuition.

Question: Is the Song of the 144,000 from the Immortal book the real thing?

JJ: I believe it is the real Song for the physical plane, but the circumstances in which it was initiated was different than in the book. Also keep this in mind. The verses of Revelation have multi-layered interpretation and there are higher octaves of the Song for the higher planes as well as inner meanings.

Something I find interesting is that no one (that I know of) has even claimed to have presented the Song of the 144,000 to the world over the past 2000 years. I am amazed there are not a hundred versions of it floating around by now, but there seem to be none. However, some have taken the Song and altered it and are using it for their own purposes.

Evidence that the Song is inspired is contained in the Song itself. The words therein are eternal words and shall not pass away, but the use of it shall increase until it shall be known among all men.

Since publishing the Song I have received many testimonies in public and private of wonderful effects that it has had on various individuals. I am often amazed when I say it myself on the difference in how I feel before and after.

When this was written in 2005 there was a great controversy over a lady named Terri Schiavo.  She was in a near vegetative state for over fifteen years. Her husband wanted to pull the plug on her and let her starve to death and the parents want her life preserved at all costs.

To make matters more complicated some believe that Terri’s condition was due to foul play from her husband. This is another issue though so let us put it aside for the sake of this discussion.

The battle between the husband and the parents has caught the national eye which has expanded the battle to include millions of conservatives against millions of liberals.

Which side is correct?

In my view neither are. Both sides are illusionary in their thinking, especially in their views of death which is seen as the most terrible thing in the universe.

In reality death is the closing of one door and the opening of another. There are many things worse than death. This is a simple statement, but one that needs to be incorporated into mankind’s thinking.

Let’s us first look at the liberal view on this. They basically believe that when one is in a no-win health situation that a person should be able to be taken off life support.

In the case of Terri Schiavo this means letting her starve to death over a period that could last a month or more.

A while back I heard a person interviewed who the authorities attempted to put to death in this manner. After a few weeks of starving her loved ones were able to reverse the decision and a short time later she miraculously recovered. After recovering she said that she was not a vegetable as the authorities assumed and that the attempt to starve her to death was a living hell.

Now, no one knows for sure if Terri Schiavo has enough consciousness left to register the living hell of starving to death, but there is a good chance she is consciously suffering at this time.

The question is this. Why in the world do the authorities pick this obscene method of putting a person to death when it would be much more merciful to put a stake in her heart or to cut her head off? Anything quick makes much more sense than a painful month of starvation.

The reason for this illogical process is that the laws of the land would condemn anyone for murder who assisted in any way with her death. The logic behind the law is that if you do nothing and just let a person starve to death in agony you are innocent.

Now the conservative believe is that physical life is a gift from God and must be preserved at all costs. They seem to think that being in horrific pain or discomfort for 10-20 years is much better than death. The main thing is to just stay alive.

This thinking doesn’t say much for their view of heaven. If heaven is so good then why the need to stay here in great pain when pulling the plug will take us to great bliss?

There is another thing to consider. When Jesus had enough of suffering on the cross he pulled the plug on himself and bailed from the no win situation. “Receive my spirit,” he said as he left the scene of torture.

Now if it was all right for Jesus to vacate a bad situation after less than one day of torture then why would we condemn Terri Schiavo or family for releasing her after 15 years of suffering?

Where is the harm so long as the patient is not tortured to death with the slow death of starvation?

A good example of how this can be done right, with mercy, is given in the movie Million Dollar Baby.

It’s a great movie and if you have not seen it yet, you will not be disappointed.

“The truth may be out there, but the lies are inside your head.” Terry Pratchett