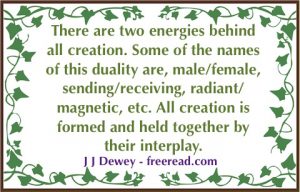 Yet, according your theory – all men have a positive charge and all woman have a negative charge, therefore, all men and woman, gay or straight, have some degree of attraction to each other

JJ: Yes, with rare exceptions, all men have a positive charge and women have a negative charge, even gay men and women, though they are much closer to the zero point.

Reader: And this is certainly open to debate. Likewise, all people of the same sex are of the same “charge” – and because of this – there would be repulsion and not attraction,

But this doesn’t explain why all men (positive) aren’t attracted to all women (negative).

JJ: I have explained this before. We bring old habits, internal memories and mindsets from our past lives. Because energy follows thought, a gay man who is +1 may override his weak attractive force toward his opposite polarity. This will generally not be based upon a consciousness effort, but because of past influences.

Reader: I have a theory about this, as well. Attraction is caused by a difference in polarity, but at different levels of polarity, there is a ratio of tolerance which must be considered. This example assumes JJ’s ideas about polarity and true and correct.

John Wayne (JW) is a +10 and Marilyn Monroe (MM) is a -10. You put them together and there is an instant attraction.

JJ: Yes, the attractive force would be strong enough to notice if one was paying attention, but one must keep this thought in mind. If one’s opposite had a wart on his nose or smelled bad then this could be a stronger repellant than the attractive force.

Reader: JC is a +.3 and TG is a +.1. Put them together and there is an instant attraction.

JJ: This difference does account for some of the attraction of gays, but the main cause would be other factors. Because they are both close to the zero point, the weak force is not strong enough to cause repulsion and this makes it easier to see the perfection in the other and draw forth soul energy. When the energy is drawn forth an attractive force is created that transcends polarity.

The same happens when a positive 9.0 meets a negative 9.2. The addition brings us close to the zero point and the soul energy is easier to draw.

Keep in mind that soul energy in this context is neutral and whether it is used for good or evil depends on the person.

Reader: So, how come JC and TG aren’t attracted to MM (Marylin Monroe)?

JJ:  JC is +.3 and TG is +.1. The power of attraction toward the opposite is determined by the person’s charge, not his opposite. The attraction will bring them both to the zero point.  The merging of JC and MM would result in a minus 9.7 which is far from the zero point. They may find things to admire in each other but the natural attraction would not be there.

Reader: If you take the absolute difference between JW and MM, you get 20. That’s a 2:1 ratio between the two extremes

JJ: But you add them together and you get a point of balance or zero. No two people equal exactly zero, but if we come close, we will feel balanced, satisfied and desire to be with them.

The main factor to look at is the difference in the polarities and how close their addition comes to the zero point. Gays actually have an advantage here because they are closer to the zero point to begin with. This is one reason so many of them are involved in creative activities.

On the other hand if you have a hetro who is positive 9 teaming up with  a negative 6 you will have a gap of three which would rarely happen with a gay couple.

The ratios have little to do with the attraction.

Take two magnets for example, one a +10/-10 in strength and the other one a +1/-1. You then place them together with their opposite polarities approaching. The difference in them is 11, but the weak magnet still only pulls with a force of 1.

Reader: This is theory, but I have observed in real life that straight men and women are not very choosy about their partners, and an explanation for this would be the broader range of tolerance. Gay men are often accused of attacking anything in pants, but my experience is contrary to this. They are VERY picky. Unbelievably picky. It is harder for them to find a stable life mate, but when they do hit the jackpot, they stay with them through thick and thin.

JJ: This is because the large gap in force towards the opposite polarity does not get in the way of the gay whereas it causes many straight people to pick the wrong personality for them.

A reader wanted to know where I received these teachings.

If anyone reads many of my writings they will see that the purpose here is not to quote and explain what is already readily available, but to present new principles and teachings. Many of these are not found in any other writings.

Where do these come from?

How can I know if they are true if there is no authority on earth to verify?