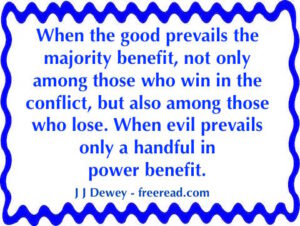 A Time for All Things

A reader commented as follows on my previous post: Please allow me to offer a suggestion that the ‘righteous war’ spoken of in Rev 19:10 and other scriptural passages refer to the battle that occurs within the heart and mind of fallen man. It is a part of the cleansing process within where carnal man gives up all things he once mistakenly thought were wonderful, just, and righteous.

JJ: That’s not what the scripture says. Let me repeat “In righteousness does he (Christ) judge and make war.” Rev 19:10

All scripture (according to Jewish tradition) has application on three levels. Each inspired word is said have a body, soul and spirit as far as interpretation goes. Of course, there are higher symbolic meanings, but there is also a meaning that applies to the physical plane and physical war.

I would hope, for instance, that you realize that, according to DK, the Christ supported the Allies in their war against Hitler and gave them inspiration that led toward victory.

It is always good judgment to stop an aggressor from destroying the free will and lives of the innocent.

You indicate that you support the idea of war on the higher planes. Why would you accept one kind of war and reject another kind if both lead to greater freedom? Where is the fundamental difference? If a spiritual war for freedom is right why would a physical war for the same thing be wrong? Where is your logic? Do you think that the temporary loss of the physical body is worse than the loss of freedom?

Reader: The outer war is a manifestation of the failure to understand that peace comes from conquering the beast within rather than killing ones presumed enemy without. In truth, we are our own worst enemies, not someone else whom we erroneously think are to be overcome in order to achieve peace.

JJ: Yes, it is true that World War II started because Hitler failed to understand the idea of conquering the beast within, but when he presented his problem to the world, the Allies had to respond in kind or we would all be either speaking German today or be made into lampshades.

France thought they would deal with Hitler by being peaceful and look what happened to them. They had to be rescued through brute force. Nothing else had power to free them at the time.

Reader: This sort of call to arms as found in the prior email is as old as the world. Men go to war that they might inherit dust. We should consider the possibility that dust is not worth the suffering that is necessary to acquire and hold it.

JJ: There are just wars and unjust wars. Was it not worth it for the Founding Fathers to fight for their dust as well as their freedom?

Reader: It is said that we should renounce war and proclaim peace. It is truly amazing to see how we as fallen beings can turn that idea around and call for a force of power for war under that same banner.

JJ: It is also written that there is a time and place for all things including “war.”

Since you have an LDS background I’ll quote from their scripture which tells us that war is justified in certain circumstances:

“And if any nation, tongue, or people should proclaim war against them, they should first lift a standard of peace unto that people, nation, or tongue; And if that people did not accept the offering of peace, neither the second nor the third time, they should bring these testimonies before the Lord; Then I, the Lord, would give unto them a commandment, and justify them in going out to battle against that nation, tongue, or people.” D&C 98:34-36

“And lift up an ensign of peace, and make a proclamation of peace unto the ends of the earth;” D&C 105:39

If you truly believe this scripture then you should also be making or supporting a “proclamation of peace.” Are you doing this? I am.

Reader: I find that reading such messages can be a drag on the soul. It lays upon one as does a wet suit of clothes in an icy wind. It proclaims a hope that is false and a path to suffering rather than peace, despite that path being the chosen one for all those of us who come into the world.

JJ: I beg to differ. The Revolutionary War and World War II in particular rid the world of much suffering and gave a real, not a false hope. How can you think otherwise?

Reader: The Bible does not condemn war but approves when considered just. We should consider the possibility that we as carnal beings are prone to interpret the scriptures erroneously.

JJ: Of course, this applies to you also.

Reader: Nephi, for example, in the Laban story fails to understand what he does when he murders a man in cold blood. Nephi didn’t get it. Laban was the metaphor/symbol for the beastly nature of Nephi. Nephi killed wrongly because he didn’t understand that it was he, himself, that was being spoken of. Nephi needed to kill the (metaphorical) drunken man who held the scripts but didn’t read (understand) them. That message was pointing to Nephi, but Nephi totally missed it, mistakenly thinking it was someone else.

JJ: If Nephi did not kill Laban then we would have no Book of Mormon for they would have had no scriptures and the nation “would have dwindled in unbelief.” It is obvious that Nephi correctly understood this as a commandment applying to the physical plane. If God only wanted him to see it as a metaphor he could have given it to him in a dream.

If Nephi was so much in error then why did he have such favor with God that he had many revelations after this such as a vision of Lehi’s dream?

Reader: We are like a lot of Nephi’s when we do the same.

JJ: Most of us would be a lot better off if we looked at Nephi’s whole life and were more like him. Which is worse? The physical death of one person or the spiritual death of a nation? Hopefully, none of us will ever have to make such a decision. However, during World War II, millions of people did make a similar decision and went to war to preserve freedom at the risk of death to themselves and to others.

These veterans have a place of honor in my book.