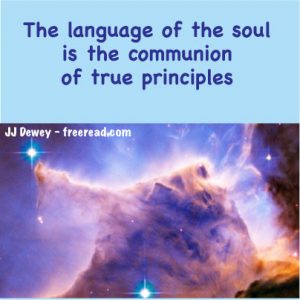 The following is a transcript of the first Keys gathering held in June 2000 in McCall, Idaho, recently transcribed.

Here is the first installment.

I’ve probably gotten more requests to speak on soul contact than any other topic so that’s the topic for tonight. Does anyone here care to explain what soul contact is? What would you say?

JJ: Let’s list them in no particular order then we’ll discuss them and put them in order. (writing on the board) What else is there?

Audience: ESP? What is the question again?

JJ: What are the usual types of communication beyond normal physical speech?

Audience: Is it something like a host of coincidences that make you late for an appointment that had you been on time you would’ve been in an accident?

JJ: Synchronicity is the term for that, but it’s a different subject. It doesn’t pertain so much between a person and another person. It’s more like events that go on around you.

Audience: When you say soul contact does that have nothing to do with the outside environment? It’s something inside of you. It’s beyond reasonable and usually is irrational and doesn’t make sense as we know it because we can’t understand it in our physical bodies as things usually make sense.

JJ: Like an impression that doesn’t make sense at first but then it makes sense later on? Have you had that happen?

Audience: Yes, more than once.

JJ: It might happen more and more as you trust it. Let’s call this instinct. (writing on board)

Audience: Are you talking about communicating between people or yourself and your soul?

JJ: Between you and anything else, another person, a flying saucer, a master or whomever.

Audience: Say you’re driving along and all of a sudden you get a message that you need to get home. That sort of thing? Impressions?

Audience: You might get an impression to do something. You’ll listen to it depending on whether or not you’re comfortable with it.

JJ: Impressions are usually not vocal. It’s usually not a voice in your head. But you get an impression telling you what you’re supposed to do. Sometimes it’s right, sometimes it’s wrong. Sometimes it’s real and sometimes it’s based on other things. We’re going to talk about getting impressions and contact that you can really trust as being reliable. We probably all know people who get impressions about things that aren’t correct. All over the internet people are predicting doom about twice a year. It never happens. I’ll make this prediction. When we do have a major international problem, no one will have predicted it. (laughter)

Audience: Is there any truth to when you get an impression the more likely that it’s real is proportional to how it’s something you don’t want to do? Is there any correlation in that?

JJ: When you get an impression to do something you really don’t want to do, that’s a sign you’re not making it up. When you make up your impressions it’s usually going to go along with something you already believe in. For example, you meet a really good looking guy and say, “Oh man, my soul tells me he’s for me!” Or, “she’s really a knockout.” The personality is talking to you and your soul is just playing along. Suppose your soul told you to marry someone you didn’t even like, that’s something you’d never consider doing on your own so maybe you need to pay attention to that. (laughter)

So we have intuition, different forms of ESP, and instinct. Let’s start with the lowest. The lowest is instinct. (writing on board) Our instinct is our animal nature. Animals are very instinctive. We’ve heard about the swallows returning every year to Capistrano. Instinct is basically a computer program that’s built in the make up of living entities. It produces, with incredible accuracy, things we need to do as a species to preserve ourselves or make ourselves more comfortable and so on. Animals have a lot of things built into them. That’s one of the reasons some new-agers are claiming that animals are more intelligent than humans. They’re so instinctive. That instinct carries over into the more primitive people. The tribal type people are very instinctual. The pygmies and various tribes living in South America, etc rely on instinct because they are fairly new souls to the human kingdom. They don’t have nearly as many lifetimes under their belt as many people in civilized countries.

What happens as a person grows out of instinct and begins to develop his emotional nature, or the astral part of himself, is that he begins to lose his instinct. It appears that he loses it but he doesn’t really lose it. It’s called going below the threshold of consciousness. All the instincts of the animal kingdom are built into us. We have everything the animal kingdom has and everything the tribes in Australia, the pygmies, the tribes in South America have. We have them all but they appear to rarely be displayed by us. We have them all within us because in past lives we developed all these instincts.

We evolve by using that key word ‘attention’. We make a decision and place attention on that decision. Once we’ve learned instinct and everything about it we want to move past it and develop our emotional body. We shift out attention from instinct to the emotional nature. When we shift out attention off instinct, everything dealing with instinct goes below the threshold of consciousness because our attention is no longer on that. It’s still there just like everything you learned in fifth grade is recorded in your computer brain. You can go back using regression and recover a lesson a teacher gave you twenty years ago, word for word. It’s all still there in your computer brain but it’s below your threshold of consciousness because your attention isn’t on it. If you would’ve listened to that teacher twenty years ago and kept your attention on that lesson you’d still have it in your threshold of consciousness. Because you did not do that, because it wasn’t important enough to keep your attention on, it goes below your threshold of consciousness. Yet it hasn’t disappeared. Everything you learn in your life is still there. Within you are all the instincts that the animal kingdom has ever had, and primitive man has ever had, it’s all within you and can be retrieved anytime you put attention on it. It can be brought back anytime it’s needed.

But right now, as a person moves to develop his emotional nature, he puts his attention on developing the feeling side of himself. When he does that, all the instincts he has learned go below the threshold of consciousness. People may feel like they aren’t very instinctual anymore but they have it and just don’t have a use for that right now. They don’t have a use for it right now because they’re developing something else.

Most of civilized humanity right now, probably about 90%, is currently centered in the astral, emotional, feeling nature. That’s where most of mankind is. This has quite a number of divisions to it.

We do get impressions through our astral nature. The trouble with the astral body is that it is a reflector. When you look in the mirror do you see yourself as you really are or something else? What sort of an image do you see?

JJ: Right. You don’t see yourself as you are when you look into a mirror. Your image is reversed. The astral takes impressions from the soul and it reverses them. So when we’re in the astral, emotional consciousness, it’s very difficult to get the truth because everything is reversed to us.

Have you ever seen two emotional people argue with each other? Have you ever seen them reach an agreement? I watch a lot of crossfire type stuff on TV. Oftentimes you’ll see a person who is very mental and is arguing from a logical point of view but he’s arguing with someone who is very astral and is arguing from his feeling side. It’s becomes clear that the astral person has everything upside down. Maybe one of them will quote some survey that’s pretty black and white but to the astral person the survey means nothing because he feels the truth is a certain way. The facts don’t mean anything to this guy. The only thing that matters to him is what he feels to be true and he argues from that point.

The guy who is centered in the mind gets frustrated because he presents polls and data and facts, like Spock on Star Trek. The other guy is like Bones on Star Trek. I like Star Trek because it’s so representative of the different stages of evolution. The original one is much more so than the more recent versions. The Klingons were the instinctual types. Next was Bones. He was very astral and emotional and got upset over everything and chewed Spock out even though Spock was being logical. Spock was very logical and detached from his emotions almost completely. Then there was Kirk. He was a totally different brand of guy. How was he different from the others?

Audience: His emotions were ruled by his mind.

JJ: Yes, his emotions were ruled by his mind but he went beyond the mind.

Audience: He was intuitive.

JJ: Right, he was intuitive. He said something on one episode that sort of amazed me. He was presenting a plan. Spock said the plan was not logical. Kirk responded, “When you go through school to become a Start Fleet Commander they look for intuition. One thing a person needs to have in order to be a commander of a ship such as this, is that he must be able to make decisions based on intuition. I know the solution I’m presenting to you does not seem logical but when it’s all over and the solution seen, you’ll see then that it was very logical.”

Spock said, “What you’re saying is not logical but since we’ve been through this a number of times and in the end what you present always is logical even if it doesn’t appear logical to begin with I’ll go along with it.” In the end Kirk’s intuition always turned out to be logical. I’ve enjoyed those three divisions on Star Trek because they represent the three divisions of humanity so well.

As we go through the astral nature everything is reversed and this creates a big problem for us, for most of humanity is on this plane. It’s one of the reasons prophet Isaiah said, “Behold people call evil good, and good evil; that put darkness for light, and light for darkness; that put bitter for sweet, and sweet for bitter!” Isa 5:20 Isaiah saw this, thousands of years ago, that everything was reversed for the majority of people. To begin with spiritual contact is reversed to a great degree.

When you look in a mirror, even though the image is reversed, it’s close enough to looking like you that you don’t say, “That’s not me. It’s the reversed me.” You don’t think that when you look into a mirror. When a person in the astral nature gets astral impressions in reverse, they are close enough to reality that he doesn’t usually question it. It seems real just like the reverse you in the mirror seems real and you don’t question that. Matter of fact, that’s the only you that you ever see. You don’t see how you really are so you identify more with the reverse you than the real you. If we were to see our unreversed self it would seem sort of strange. So this is the problem of the astral nature.