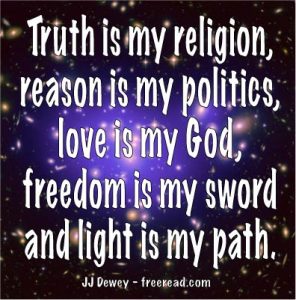 The Principle of Freedom, Part 2

A reader brought up an interesting possibility and that is a potential “tyranny of the majority” over the minority.

This is a possible occurrence, but it is rare in government. 99% of the time when there is tyranny it is the tyranny of a minority over the majority.

For instance Hitler and his NAZI party were a minority who exercised tyranny over the majority.

Lenin had minority support in his tyranny that took away freedom and cost the lives of millions.

Nero never checked with the will of the majority when he performed his nefarious deeds.

So when has a majority approved of tyranny over a minority?

An example often given was during the early history of the United States the blacks were a minority tyrannized by the majority.

I submit to you that this is not true. Never during the history of slavery in any country was there ever a vote called for that called for a decision by the majority as to whether there would be en enslaved minority.

When America was young a minority of wealthy people imported slaves to this country. The average good-hearted people who opposed the practice did not stop them because:

(1) There were no laws in the young territory to prohibit slavery.

(2) It was dangerous to oppose the wealthy and the powerful.

Up to the time of the American Civil War slavery was enforced by a rich and powerful minority.

When Lincoln was elected president the South largely succeeded from the Union because of fear of the new President’s views on slavery. Lincoln’s “nation divided” speech terrified them. His famous words that “a nation divided against itself cannot stand,” shook them to the core. That a nation half free and half slave cannot continue to exist was like a war cry. Then when Lincoln pressed for the prohibition of slavery of new states the South felt overwhelmed and fearful that they would lose their grip.

Many teach today that the war was fought to save the union and not over slavery, but I submit that if there had been no slavery issue there would have been no war. The South definitely broke off from the Union because of the issue of slavery and over the fear of Lincoln’s views on the matter. There were other factors, but slavery was the prime cause.

Now here is my main point. At the beginning of the civil war the free states had about twice the population as the slave states and, in addition to this, many people who lived in the slave states were against the institution of slavery. For one thing, we know most of the blacks were against it. Combine this with sympathetic whites and you have at least a third or more of the South who were opposed to slavery. Therefore, if a vote had been taken from the whole of the people of the United States, North and South, we would have had close to 70% vote against slavery. It is beyond dispute that a majority of people at that time were not in support of it.

If the South had been allowed to exercise their independence then it is possible to have had a situation where a majority enslaved a minority, but as it was the Majority (the North) followed its sense of duty and freed the slaves preventing this situation from materializing.

I cannot think of one time in history where a majority actually voted to support a tyranny against a minority – injustice perhaps – but not tyranny.

The Book of Mormon makes an interesting statement about majority rule:

“And if the time comes that the voice of the people doth choose iniquity, then is the time that the judgments of God will come upon you; yea, then is the time he will visit you with great destruction even as he has hitherto visited this land.” Mosiah 29:26-27

It is interesting that as the South approached a situation where the majority of the people may have supported slavery that they were indeed visited with great destruction.

It is also interesting that after Hitler had assumed power and influenced the majority to persecute the Jews that his nation and system of government were also destroyed and even the country was split in two after the war.

Even though there was not a majority vote available in ancient times I can think of one great example where a majority exercised tyranny over a minority, and that was during the time of Moses. Of course they did not have a majority rule type of government for the Pharaoh was seen as the absolute Monarch with power over life and death. Nevertheless, from all accounts the majority seemed to support the Pharaoh in enslaving the Hebrews.

Unlike the South where only a few slaveholders received much benefit the majority of the Egyptians profited from the slaves. The whole of the Hebrew race did all the grunt work, the dangerous work and much building and construction that was of benefit to the majority. Thus the majority became dependent on the slaves and developed a selfish interest in maintaining the institution.

If therefore the principle enunciated in the Book of Mormon is true then the Egyptians should have been ripe for destruction.

And indeed they were and the Powers That Be saw to it that destruction came by calling Moses to deliver the famous plagues that finally forced the Egyptians to free the slaves.

Now the interesting thing is that history repeats itself according to the law of cycles and correspondences and it is prophesied several times that we shall have a future correspondence to the time of Moses.

Isa 52:1 Awake, awake; put on thy strength, O Zion; put on thy beautiful garments, O Jerusalem, the holy city: for henceforth there shall no more come into thee the uncircumcised and the unclean.

Isa 52:3 For thus saith the LORD, Ye have sold yourselves for nought; and ye shall be redeemed without money.

Isa 52:4 For thus saith the Lord GOD, My people went down aforetime into Egypt to sojourn there; and the Assyrian oppressed them without cause. 52:5 Now therefore, what have I here, saith the LORD, that my people is taken away for nought? they that rule over them make them to howl, saith the LORD; and my name continually every day is blasphemed. 52:6 Therefore my people shall know my name: therefore they shall know in that day that I am he that doth speak: behold, it is I. 52:7 How beautiful upon the mountains are the feet of him that bringeth good tidings, that publisheth peace; that bringeth good tidings of good, that publisheth salvation; that saith unto Zion, Thy God reigneth!

Isa 52:8 Thy watchmen shall lift up the voice; with the voice together shall they sing: for they shall see eye to eye, when the LORD shall bring again Zion.

Who would be so foolish to yield themselves into slavery for no payment?

Notice that the number of taxpayers in the civilized nations is shrinking to smaller and smaller numbers who provide more and more services to larger and larger numbers of people?

Was not Isaiah farsighted in stating that “they that rule over them make them to howl.” The poor taxpayer certainly comes close to howling at times.

Now because the non taxpayer (and minimal taxpayers) can vote, this means that he who is not contributing obtains the position of telling he who is contributing how his money is to be spent.

In many countries we are approaching the time when the majority will be receiving benefits through the government that is from the earnings of others. When a person receives such benefit he will tend to vote to sustain the benefit no matter how unfair it may be to the persons providing it. In his mind he is voting for greater freedom for himself, but at the expense of the free choice of the person providing the money.

As we approach this circumstance where the majority receive hand-outs through the government from the slavery of hard working taxpayers we approach a situation where we have a majority who have a vested interest in continuing to increase taxes and tyrannize a minority.

In the United States it is now difficult for a politician to get elected unless he promises lots of federal dollars to a greedy majority who feel that it is right to take what does not belong to them. (Remember we defined greed as wanting more than you have a right to have).

The prophets tell us that when this time comes there will be a gathering of Lights from among the nations and that the leaders will attempt to stop the gathering so they can continue to get the benefits (taxes) from the slaves. There will then be great signs and wonders similar to the time of Moses and a new nation will be created where greater freedoms will be enjoyed than has ever existed upon the earth. Isaiah tells us that this new nation will be so successful that the great, the rich and the kings of the nations will bring their wealth and gold and silver to this gathering of Lights. In other words, it will turn out to be one of the greatest investment opportunities of all time.

Where will this new nation be? That is a great mystery, but will be revealed in the future. The location has been waiting untouched for thousands of years and none have foreseen it even though it is hinted at in the scriptures.