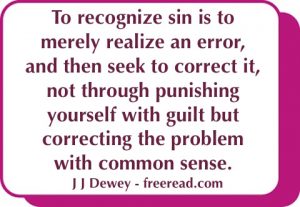 The Mystery of Atonement

By popular demand I will write a few more words on the atonement seeking to get to its core principle.

The word was used a lot in the Old Testament in reference to animal sacrifices and cleansing processes as atoning for the sins of the ancient Israelites.

This process tended to have a similar effect to the current principle of Catholic confession. The sacrifice or the confessions by themselves do nothing to change outward cause and effect, but they do have a powerful inner effect.

The effect is that it removed guilt from the participants.

As I have previously written, this is also one of the effects of looking upon the sacrifice of Christ as a great and final sacrifice. It does not remove karma, or cause and effect, but it can remove the sense of guilt that plagues so many.

It is an interesting fact that the word “atonement” was never spoken by the mouth of Jesus either in the New Testament or in any of the Mormon scriptures. Neither was it written by any New Testament prophet. The King James has Paul speaking it once, (Rom 5:11) but it is mistranslated from KATALLASSO, which means “restoration.” The Book of Mormon prophets did use it quite a lot before the time of Christ just as did the old testament prophets.

The natural question arises then – why is it that Jesus himself was silent both in his life and in various revelations given about this principle?

Could it be that his silence was a witness to the possibility that the common understanding of the principle was not correct and they were not mentally prepared to hear and understand the true principle?

Is it possible that the ancient prophets, good men though they were, had an imperfect understanding that needed correcting in a future time?

This, I believe to be the case.

If I am right then we must ask – what is illusion which clouded the presentation of the ancient teachers?

The answer is simple. It is the power of the beast as taught in the 13th chapter of the Book of Revelation.

To understand this we must remember what the beast is as we discovered in our previous exploration of the subject.

He who is free of the beast leans on the Spirit of God within, or has “the Father’s name written in their foreheads.” Rev 14:1

Thus we have two groups of people emerging. Those who lean on the name (or presence) of God within and those who substitute God within for the mark (or authority of) “a man.”

Now here is an interesting point I have not covered yet. Except for a few rare individuals, all people before the time of Christ were under the mark of the beast. In other words, all but a rare teacher leaned on the authority of a teacher, the scriptures or idols that were outside of himself.

This presented a problem to the ancient prophets, even if they themselves had true vision. The people as a whole were not ready to shed the mark of the beast in any land or in any ancient time. Therefore, the prophets were forced to take the highest the people could accept and use this as an instrument of teaching in the hope that it would provide a stepping stone to eventually leave behind the mark of the beast and the nature of the beast from which their bodies had evolved.

In other words, the prophets were forced to incorporate the principle of the mark of the beast within their teachings, or not teach at all.

Thus in teaching the people about the atonement they taught about the coming of a Messiah, a man who would have an existence outside of themselves, away from the God within. The prophets had the hope that the recognizing of a messiah on the outside would lead to the recognition of what his words would do to the inside.

Looking outside of ourselves, for redemption, to the sacrifice of a man, or man/God, is in the true reality leaning on the beast and accepting the mark.

BUT… Because the consciousness of the people was subject to the beast, the demand was for salvation from outside of self, or in the opposite direction of the God within.

The plan then was for the coming of a great teacher who would be the Messiah. While this Messiah would be a man speaking words outside of themselves, the words would penetrate their souls and guide the people to the Holy Spirit which dwells within. When the people then contact the Spirit, they begin to relinquish their dependence on the messiah without and develop faith on the voice of God within.

This was understood by the prophet Alma who said:

“For it is expedient that there should be a great and last sacrifice; yea, not a sacrifice of man, neither of beast, neither of any manner of fowl; for it shall not be a human sacrifice; but it must be an infinite and eternal sacrifice.

“Now there is not any man that can sacrifice his own blood which will atone for the sins of another. Now, if a man murdereth, behold will our law, which is just, take the life of his brother? I say unto you, Nay.

“But the law requireth the life of him who hath murdered; therefore there can be nothing which is short of an infinite atonement which will suffice for the sins of the world.

Notice that Alma says: “there is not any man that can sacrifice his own blood which will atone for the sins of another.”

Now since Jesus came as a man, then the true atonement can not be the sacrifice of the man Jesus, his physical body and his physical blood.

What then was the sacrifice which brought the atonement?

Alma says it is that “great and last sacrifice will be the Son of God, yea, infinite and eternal.”

If the shedding of the blood of a man will not “atone for the sins of another,” then what was sacrificed which brought the atonement and why is it called “infinite?”

John gives us a clue:

“This is he of whom I said, After me cometh a man which is preferred before me: for he was before me. AND I KNEW HIM NOT: but that he should be made manifest to Israel, therefore am I coming baptizing with water. And John bare record, saying, I saw the Spirit descending from heaven like a dove, and it abode upon him. and I knew him not: but he that sent me to baptize with water, the same said unto me, UPON WHOM THOU SHALT SEE THE SPIRIT DESCENDING AND REMAINING ON HIM, THE SAME IS HE WHICH BAPTIZETH WITH ‘THE HOLY GHOST. And I saw, and bare record that this is the Son of God.” John 1:30-34.

John saw “the Spirit” descend and remain with Jesus. What was the Spirit that came down and “remained” with him?

Jesus said quite clearly over and over that it was not him that was doing the great works, but the “Father” that dwelt within him. This Father was the Son of God that John witnessed descend and remain in Jesus.

The true sacrifice of the son of God was not in the form of a man of flesh and blood being hung upon a cross. Instead it was a being of pure spirit descending from above, sacrificing residence in the realms of pure spirit to reside with men in the flesh.

We have heard that there is significance in the word itself as it is broken up into a trinity of syllables as follows: AT-ONE-MENT.

Some have expressed the idea that AT ONE moMENT in space and time a great synchronization between God and man happened.

There is more truth in this than writers on the subject have realized.

The true atonement, as brought by Jesus, took place when AT ONE moMENT in time and space the lower man was lifted up in consciousness to be AT ONE with the higher spiritual life of the infinite Son of God.

What, then is the atonement in relation to us as individuals?

Our atonement comes when we have faith, not on the man Jesus, but on the words which he brought as taught in the scriptures:

John 6:63 It is the spirit that quickeneth; the flesh profiteth nothing: the words that I speak unto you, they are spirit, and they are life.

John 6:68 Then Simon Peter answered him, Lord, to whom shall we go? thou hast the words of eternal life.

John 14:23 Jesus answered and said unto him, If a man love me, he will keep my words: and my Father will love him, and we will come unto him, and make our abode with him.

Thus we see that his eternal words “are spirit, and they are life” and if we keep them God will make his home with us.

When we accept the eternal words of Christ and they stimulate the life of the spirit in us AT ONE moMENT, in this “holy instant” God as Spirit descends and we as humans ascend meeting at the midway point of the Christ consciousness.

At this instant we leave our errors (sins) behind never to be the same again. The disciple has now tasted the greater life and the blending AT ONE moMENT of spirit and matter causing an infinite and eternal effect on him so he can never again return to the person he was. He is not perfect and will yet make many mistakes, but he has been atoned toward a new life and path that will forever eclipse the old one.

But what the disciple does not yet realize is that there are numerous atonements and they are all infinite. The first great atonement through the words of Christ is the attainment of soul contact, but after this is achieved there are further steps to take to return to our true home.

The multiple atonements are steps on a great stairway and when one of the steps is taken and the new vision obtained the ascent becomes infinite for the pilgrim does not retreat but goes onward forever in eternal progression and BECOMING until he achieves a fullness of BEING.