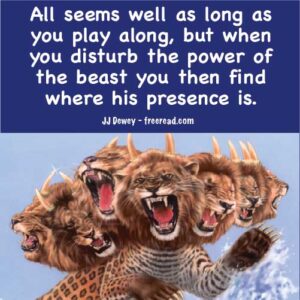 Now we arrive at perhaps the most mysterious and controversial chapters of all scripture. Here we learn about the beast.

We have discussed this chapter before, giving the exterior interpretation. Now we shall synthesize the inner and the outer and perhaps shed some more light.

The dragon of desire has been cast out of the higher realms of consciousness by the followers of Christ. Eventually they control this dragon, but he rests not. The energy of desire moves to other lesser lives seeking expression.

John stands “upon the sea.” The sea here stands for the multitudes of people who are grounded in the emotional/astral world or consciousness. They are fertile soil in which the dragon can take root. Out of the masses comes an image that is very similar to the dragon. The dragon had “seven heads and ten horns, and seven crowns upon his heads.” (Rev 12:3) And now the beast has “seven heads and ten horns, and upon his horns ten crowns, and upon his heads the name of blasphemy.”

The beast is almost created after the image of the dragon but not quite. Let’s look deeper.

The seven heads stand again for the seven chakras or centers of consciousness. When the dragon is in heaven, or the seat of decision, it has subtle control and influence over them all. The seven crowns symbolize the spiritual authority of the dragon. By using guilt in connection with the conscience, the dragon is able to direct all seven levels of consciousness to accept it as the outer voice of God – the king of Heaven.

The ten horns represent the ten petals of the solar plexus center which governs the emotions. Each of these ten petals represent a dual emotional vibration. These are:

The dragon had the crowns upon his heads. Outwardly this symbolizes his influence of authoritative religion over the seven divisions of civilization in humanity’s past. Inwardly, it tells us a religious-like authority governs all levels of consciousness in the emotionally grounded individual.

The dragon, which started in heaven with crowns of reverential authority on his heads was thrown to the earth. There he morphed into he beast which no longer showed reverence to the higher consciousness of heaven and now wore the names of blasphemy.

On his heads then are the names of blasphemy. The King James says “name” but most modern versions correctly translate this as “names.” What are the blasphemous names on the heads of the beast?

The emperor of Rome was proudly called Caesar Augustus, with Augustus meaning Lord indicating that Caesar is a god. We all know many Christians were fed to the lions and crucified. Did you know that much of it had to do with the refusal to accept this and other names chosen by the Roman emperors?

The Pope has on his hat (which looks like a crown) the name “VICARIVS FILII DEI.” This Latin translates to “in the place of the Son of God” and the Roman numerals of the name add up to 666. This is just a serendipitous addition and we don’t mean to single out the Pope as the Beast as many Protestants do, but most of the religious and political leaders share in the crowns and names of blasphemy by which they love to be recognized.

These names are not negative names like Antichrist, Satan, devil and so on. The names of the beast are adored by the world.

Here are some of them

Why are these blasphemous names?

The great name of blasphemy was that the Emperor Caesar went beyond Augustus to being called Lord and being deified as a God. Once a year each citizen had to appear before authorities and acknowledge that Caesar was virtually God. Once one did this then he could go worship according to his choice undisturbed. But if one put Jesus or some other version of God above Caesar then he was seen as a danger to the state and was usually executed.

Thus the most blasphemous name on the beast then is when a flesh and blood man like the rest of us is called and worshiped as a God. It is true that even Jesus said that men are Gods (John 10:34) but he was speaking of God in all of us with equality, great and small. Caesar was declared God as one who was special and unique among men. Caesar demanded to be worshipped, and it is blasphemy for one man to worship another man or even see another person as having more rights than he himself possesses.

The interesting thing about the emperors of Rome is that it was not the government who initiated the idea of calling the emperor a God, but it was the people. The early emperors thought it was a silly thing for the people to do, but eventually they were called gods long enough and with enough repetition that they began to believe it and also see the idea would secure more political power.

One does not need to go to the extreme of calling himself a God to his fellow men and women to have a name of blasphemy, but any name that brings the person a reverential respect takes away from the glory that belongs to God alone. Even Jesus was very cautious about not taking away from the respect due God alone.

A man once addressed Jesus as “good master.” To this he responded:

Jesus did not even want to take the chance of looking too “good” to his followers, but now the mindless followers think it is blasphemy to call Him anything less than the best and most perfect creator God of the universe.

Here is another example:

“But all their works they do for to be seen of men: they make broad their phylacteries, and enlarge the borders of their garments, And love the uppermost rooms at feasts, and the chief seats in the synagogues, And greetings in the markets, and to be called of men, Rabbi, Rabbi. But be not ye called Rabbi: for one is your Master, even Christ; and all ye are brethren. And call no man your father upon the earth: for one is your Father, which is in heaven. Neither be ye called masters: for one is your Master, even Christ. But he that is greatest among you shall be your servant. And whosoever shall exalt himself shall be abased; and he that shall humble himself shall be exalted. But woe unto you, scribes and Pharisees, hypocrites! for ye shut up the kingdom of heaven against men: for ye neither go in yourselves, neither suffer ye them that are entering to go in. Woe unto you, scribes and Pharisees, hypocrites! for ye devour widows’ houses, and for a pretence make long prayer: therefore ye shall receive the greater damnation. Woe unto you, scribes and Pharisees, hypocrites! for ye compass sea and land to make one proselyte, and when he is made, ye make him twofold more the child of hell than yourselves.” Matthew 23:5-15

Isn’t it interesting how clearly Jesus tried to teach the principle of not using a name or title that exalts one person above another because “all ye are brethren.”

The Catholic Church has certainly disregarded the command of “call no man your father …” Using the title or name of “reverend” violates the same principle and is blasphemous. One man is to be revered no more than another because “we are brethren” as Jesus taught. Many religions use the title of “Holiness” or “Holy” in reference to their leaders. Many New Agers use the title Master when talking about a teacher, but there is one Master and that is the Christ within all of us. If a teacher does not speak to that center within us then we should ignore him.

Royalty uses all kinds of blasphemous names to God such as “Your Highness,” “Your Majesty,” “Your Excellency,” and so on. Even the idea of one being a king or the divine right of kings is blasphemous. One person has no more divine right to be a king than does another.

Then there are many titles that are not blasphemous because they do not indicate that a man is taking the place of God. A title is correct if it merely indicates the job he is attempting to do in this life such as President, Mayor, judge, Senator, doctor, teacher etc. There is nothing untruthful or disrespectful about these names.

You will find, however, that wherever unjust authority rears its ugly head that the person exercising it will revel in the chance to be called by some title that belongs to God alone.

Then there are religious and political organizations where blasphemous names are not allowed, but the leader is still revered as one who is infallible or able to commune with God in a way that the average guy cannot. This type of fixation corresponds to a name of blasphemy and it will be just a matter of time before the illusionary names surfaces to fit the thoughtform.

Truly great leaders are examples of what we are to become, not examples of holiness that we cannot attain. When is the last time you heard a person with a Godlike title speak in such a way that it spoke to your inner Christ and did cause your heart to burn? Probably never.

It is different when a true teacher who wears not the names of blasphemy speaks or writes. The soul of the seeker will be stirred.

“And the beast which I saw was like unto a leopard, and his feet were as the feet of a bear, and his mouth as the mouth of a lion: and the dragon gave him his power, and his seat, and great authority.” Revelation 13:2

Contemplate the inner meaning and we will examine this in a future post.?