Here are some samples of the Pope’s handwriting. 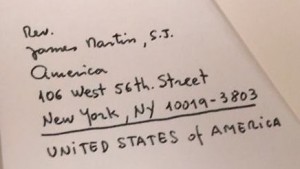 What stands out the most about him is that his focus, most likely for many years, has been more on the inner world than the outer. He’s happy being by himself with his prayers, his books and messing with whatever things he enjoys. He likes his space and does not like to feel crowded by atmosphere or people. He is suspicious and apprehensive about the motives of others, especially new people coming into his life. Yet at the same time he has good social skills and is charming and would draw people to him.

He is a humble man and has not attained his position because he has sought power, but has a good mind and has thought through what he wants to accomplish in life and has moved toward it. To accomplish his goals requires that he have a lot of interaction with people. If his mission in life didn’t require such interaction he would be happy spending a good portion of his time alone pursuing his personal interests.

As it is he forces himself forward attempting to reach out and pursue his version of what he sees as the works of a good shepherd.

He doesn’t have a big ego and is not working for self glorification, as are many leaders.

He is above average intelligence. He has good powers of focus and concentration and is capable of sustained mental pursuits without being distracted and needing few breaks. His mind is flexible and can shift attention rather easily. In speaking he is rarely at a loss for words.

He would make a good student and scholar in the traditional sense. He could be quite happy spending a lifetime in research and learning, except his feeling the need to serve his fellow men takes him a different direction.

His approach to things that interest the average person is fairly dispassionate and mentally controlled. He doesn’t let himself get excited about them, but he feels very strongly about things that will further his path of service. He has a strong emotional memory and well as a good regular memory.

Even though he has a good mind he does have several weaknesses that hamper his intellect.

(1) He is insecure and likes to play things safe. This trait probably wouldn’t have worked well for him if he had been a businessman or worked in some competitive industry, but it worked for him in the church for there playing it safe keeps you away from drawing negative attention and negative attention can hurt your step by step climb up the ladder in a conservative religious organization. He is a plodder and keeps moving ahead a step at a time.

(2) He doesn’t like conflict and tends to follow the line of least resistance. Even so, he likes to make his own independent decision and tries to think out of the box. His out of the box thinking will produce safe directions that will gather more support than he would lose.

Let us take his views on global warming and the evils of capitalism. He’s gotten a lot of support from the media on these and other stands. This support will cause him to feel he is avoiding as much conflict as possible while still moving ahead with his ideas.

(3) He doesn’t look at all sides of a problem so he doesn’t apply the full power of his mind to analyzing his views and find the flaws in his ideas and reasoning. He could be easily misled because he relies too much on standard authority and does not analyze all things for himself.

Again let us take global warming. Because the authorities he has come across give a certain view on it then he supports them without studying it out for himself.

Because it seems Christian to him to not build walls he accepts this and misses the quote from the New Testament telling us that even God has a wall around his city. Rev 21:9-12

Donald Trump may well be right that Mexican authorities misled him about his views. Instead of finding out Trump’s exact words he reacted to what he was told Trump said which may not have been accurate.

He likes to be open with his emotions but is fairly secretive with his words. He doesn’t tell all he knows by a long shot.

In summary his most positive traits are: Good intellect, creative mind and is not in his line of work for the ego. I doubt if he can be bought.

The negative is he can be fooled and captivated by illusion and tends toward the line of least resistance.

He doesn’t like stirring up controversies, but feels he can handle them because of the public and media support he receives. He has a 78% favorability rating with his followers.

There is much more I could write concerning his personality but this should give some food for thought.