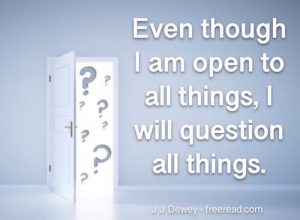 Question Eleven: Which would you rather win?

(a) A free ticket on the first passenger rocket to the moon. (b) An all expense trip around the world.

A Synthesizer always has a spirit of adventure and loves to explore and discover, therefore he would rather go to the moon than on a mundane cruise around the world.

Question Twelve: If you were in the mountains and met a harmless looking old man, who told you that he was a keeper to a passageway to the center of the earth and you had been selected to meet some wise master awaiting your visit; but first you must follow the old man through an unknown passageway, what would be your attitude?

(a) Assume immediately the old man was crazy and ignore him. (b) Be curious and ask some questions, but not go to the passageway. (c) Ask questions and follow the old man just to see if such a passage exists, but not enter it.

(d) Probably be curious enough to follow the old man into the passageway.

This question is also related to curiosity and the desire to explore, which is the mark of the Synthesizer. Such a person would be curious enough to follow the old man to the cave and courageous enough to enter it and explore. The man with the highly developed intuition would generally know if he was in danger.

Question Thirteen: If an old friend, whom you knew was a bit eccentric, approached you with a sure fire get-rich-quick business venture concerning a revolutionary computer product, requiring a $l,000.00 investment (which you just happen to have at the time), and he tells you that you should be able to get that back tenfold in a month, plus, with a little work, obtain financial security for the rest of your life–you would: (a) Be polite, but express no interest in the venture. After all, the man has a reputation of being involved in useless schemes. (b) Be polite, listen to what the man has to say, then ignore him. (c) Listen to what the man has to say, on the off chance that he may have come across a venture of real value. If the idea sounds good, and further investigation warrants it, I may invest in it. (d) If the man presents me an attractive enough picture, I would take a chance and definitely invest in it.

This question tests tolerance, curiosity and open-mindedness. Also there will be many who may not give a truly honest answer here, for few people will listen or consider the ideas of one who has a reputation of being eccentric. (c) is, of course, the best answer. A Synthesizer has enough sense to not jump at an opportunity just because it sounds good. He will at least investigate it as much as possible. If, however, the idea strikes a chord with his intuition, he may espouse it contrary to what appears logical.

Question Fourteen: If you had a six year old daughter who, as far as you knew, was completely normal, and she came up to you out of the blue and explained that some space people were in contact with her by mental telepathy and that they had a very important message for your family and also for the people of the earth, how would you react? (a) I would feel that my daughter is possessed and take her to my religious authorities. (b) I would feel that she has a problem and take her for professional help. (c) I would ignore the problem and hope it goes away. (d) I would question her with the attitude that her communication may be valid. (e) If the communications seemed logical and intuitionally sound, I would take them seriously

This question is a good test of open-mindedness. Be sure you are honest here. Open-mindedness is the hardest point to prove through a test because almost all people believe themselves to be so. I have never met one person who thought he was closed-minded, yet there are billions of such persons out there.

A Synthesizer always recognizes the shades of grey and obeys laws, rules and regulations because of the good they achieve. If going a few miles over the speed limit creates no harm, then his conscience does not suffer. Those who are bothered about going five miles over the speed limit would have done well under the law of Moses, but missed the concept of the law of Christ.

Question Sixteen: If your mother was cheating on her income tax and the authority (religious, political or otherwise) whom you admired most told you to report her–would you? (a) Yes (b) No.

Again, the black and white type person would answer yes here. This is the type of person who made Hitler so successful. Much of Hitler’s success was due to the good Christian people reporting on each other for indiscretions. The mother of the Synthesizer would have to be guilty of significant harmfulness before he would even consider reporting her to the authorities. He may counsel her in private where he sees it may be beneficial.

Question Seventeen: If your child broke a fairly harmless archaic school rule, which if discovered would lead to expulsion, would you report him if the authority you admired most counseled you to? (a) Yes. (b) No.

The same principle applies here. Many would not report transgressions of others on their own initiative, but would if some authoritative figure told them to–a prophet or priest, for instance. A Synthesizer does not have an authority for his conscience, but the Holy Spirit.

Question Eighteen: If your children were starving and you had a rich neighbor who refused to give you any food and you had an opportunity to steal some bread from him which may save the lives of your children, how do you think God would feel if you stole the loaf?

(a) I have committed a sin because I have broken a commandment. I must be punished. Even though I was in an awkward situation, I shouldn’t have done the deed, nor should I have allowed myself to be put in that circumstance. (b) God would overlook it , as I took the loaf as an act of love.

One who answers (a) here must look upon God in a similar light as the Nazis looked upon Hitler or as the Jews in the time of Christ looked upon their religion. Jesus told them: “Woe unto you, scribes and Pharisees, hypocrites! for ye pay tithe of mint and anise and cummin, and have OMITTED THE WEIGHTIER MATTERS OF THE LAW, JUDGMENT, MERCY, AND FAITH.” Matt. 23:23. Mercy, we are told here, is one of the weightier matters of the law that is overlooked in the (a) answer. What is more important, a loaf of bread, or a child’s life?

Question Nineteen: Do you favor laws that would make harmful cults illegal? (a) Yes. (b) No.

The black and white person would be likely to answer yes here, but this is a fairly dangerous way of thinking, similar to that of the leaders in the Roman Empire in the days of Christianity. They thought Christianity was a harmful cult, made it illegal and put many Christians to death. There are laws already on the books defining what is lawful. If a cult disregards these laws, then it can be dealt with according to the law, but to define certain cults as illegal may suppress a new inspired religion that may arise in the future.

Question Twenty: Which is the worst sin?

(a) Doubting the word of God

Doubting the word of God is not a sin. How can one even know if a statement is from God unless he doubts it first and examines it logically and through the Spirit?