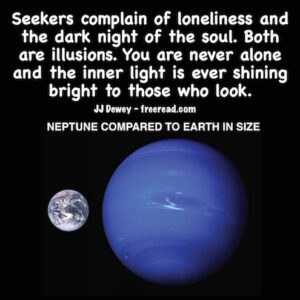 The Revelation of the Higher Self

Here is the beginning of Revelation, chapter ten:

“And I saw another mighty angel come down from heaven, clothed with a cloud: and a rainbow was upon his head, and his face was as it were the sun, and his feet as pillars of fire: And he had in his hand a little book open: and he set his right foot upon the sea, and his left foot on the earth, And cried with a loud voice, as when a lion roareth: and when he had cried, seven thunders uttered their voices. And when the seven thunders had uttered their voices, I was about to write: and I heard a voice from heaven saying unto me, Seal up those things which the seven thunders uttered, and write them not.” Rev 10:1-4

Who is this angel?

What is the little book?

What is meant by the right foot upon the sea and his left upon the earth? What are the seven thunders?

Why were the words of the seven thunders sealed?

Six angels have sounded their trumpets and the seventh is about to sound. Meanwhile, this powerful angel shows up just before the seventh trumpet. This angel doesn’t seem to be the seventh angel, which sounds the final trumpet, but represents a revelation from heaven that precedes the last angel and is closely linked with it.

Another thing to keep in mind is this. The number seven keeps repeating itself. We have already had the opening of the seven seals, or chakras, but after this we have the seven angels sounding the seven trumpets, the seven thunders and the seven plagues. The book also talks about the seven churches, seven spirits before the throne, seven eyes, seven horns, seven candlesticks, seven stars, seven lamps, seven heads, seven golden vials, seven mountains and seven kings.

It sounds like John is trying to tell us something about the number seven.

We have already noted the progress of the disciple opening the seven seals, but after this we have the seven angels coming forth sounding the seven trumpets. Are the two related?

Each center has a number of petals. The heart, for instance, has twelve. The seal of this center is open when just a couple petals are unfolded, but the majority of the petals must be unfolded before the trumpet of the corresponding angel sounds and the revelation is realized.

The seven last plagues yet to come represent the stage where the disciple uses the full energy of the centers and all seven are completely unfolded and the understanding gained from them put to full use.

Now let us examine the verse one: “And I saw another mighty angel come down from heaven, clothed with a cloud: and a rainbow was upon his head, and his face was as it were the sun, and his feet as pillars of fire.” Rev 10:1

Heaven is often associated with the highest stage of consciousness or the highest center. When the seventh seal was open there was “silence in heaven.” Now we are approaching the seventh trumpet a great angel comes down from “heaven.”

In other words, this angel represents a revelation to the disciple. To discover the nature of it we just examine the additional clues.

The angel was clothed with a cloud. What does this mean? It helps to examine the use of the cloud in previous scriptures. For one thing, God revealed himself to Moses and the people in a cloud. A cloud rested upon Mount Sinai and was in the pillar of fire that followed the Israelites.

During the transfiguration of Jesus, the voice of God spoke from a cloud and later Jesus ascended into a cloud. In addition, we are told he will come again in the “clouds of heaven.”

It is interesting that one reference tells us he will come not in clouds, but “a cloud.”

“And then shall they see the Son of man coming in a cloud with power and great glory.” Luke 21:27

This more closely corresponds to the coming of the angel who is a symbol of the coming of Christ. He who is the Christ will indeed come among us again, but there is also a coming of Christ that happens to each disciple on a personal level. When he is ready, the “angel of the presence” will visit him and it will be as real as if the Messiah from Galilee had come to his door.

When the seeker is visited, a cloud always stands between him and God for the glory of God is so overwhelming that it needs to be covered by a cloud, else the presence would be too powerful to withstand, especially before the disciple has reached relative perfection.

The cloud thus represents the glory and power of pure spirit diffused or stepped down so those of us in matter can partially comprehend that which is beyond matter.

The verse then states that there was “a rainbow was upon his head.”

You can’t have a rainbow without there first being a cloud. Without the cloud there would only be pure undifferentiated light, but the diffusion of the cloud differentiates the light of spirit into the seven colors or the seven rays that creates all there is in matter.

The rainbow represents the promise of God that the many will be gathered into the One and that behind the many is always the One.

If the disciple peeks beyond the rainbow and the cloud to the pure presence of this godlike angel he sees, not seven colors, but a face that shines in one bright light, like the sun.

The face of the angel represents the soul, the higher self or the solar angel of the disciple.

“…and his feet as pillars of fire.”

Remember that God followed the Israelites led by Moses in a cloud and pillar of fire.

The pillars of fire represent the power given to the disciple who realizes his unity with God. He now has great power to move toward spirit, even when he has descended to the lowest point in the world of matter.

Life is an unbroken succession of false situations. Thornton Wilder (1897 – 1975)

The Little Book and the Seven Thunders

The next verse to consider reads:

“And he had in his hand a little book open: and he set his right foot upon the sea, and his left foot on the earth,” Rev 10:2

The last scroll or book was sealed with seven seals. It was a great book with a lot of writing on both sides of the papyrus. This second book was very small and is not sealed but open and is readily available for John to consume.

A small scroll was not a document with a long message, a new scripture or anything of the like. Instead, such a scroll was used for a short message or announcement of some kind. When the disciple uses the intuition, and then begins to perceive the will of God, he finally sees what his mission is to be. He may have read many books in the past, in a quest to discover what he is supposed to do or to be. He wants to be of the greatest possible service to mankind, but when the moment of revelation finally arrives, the answer is reduced to a small number of words on a scroll. It may be just a sentence or two.

A thrill goes through the disciple. He is to finally find out exactly what it is that God wants him to do. No longer does he have to surmise and guess. Now is the time of discovery through the soul (the angel).

“…and he (the angel) set his right foot upon the sea, and his left foot on the earth,”

Remember the angel’s feet were as “pillars of fire” which represents great spiritual strength. The door to the soul is open and the higher spiritual life descends like a fire and anchors itself in the emotional and passionate part of the disciple (right foot on the sea) and finally blends the highest (spirit) with the lowest, or the physical nature (left foot on the earth).

The disciple is now “soul infused.” He and the Father are one.

“And cried with a loud voice, as when a lion roareth: and when he had cried, seven thunders uttered their voices.” Rev 10:3

When the disciple realizes his unity with God the inner voice is no longer a “still small voice” that one has to pay a lot of attention to even be sure it is real. Instead, the voice of God is his voice and the fire of the voice is swelling up in him to the extent that the voice is so profound and overwhelming that it is as if it is the voice of a lion roaring.

When the voice of God penetrates him to the soul the “seven thunders uttered their voices.”

Thunder signifies an awakening. Seven thunders tell us there is an additional awakening of the disciple throughout his whole being, which is governed by the seven centers. Every part of his life energy is stimulated by the voice of God and is awakened to a new purpose, unrealized before.

The disciple has received a full realization of who he is and his purpose and he feels like telling the world but the voice of the spirit says no. “Write them not” – do not announce your mission. Seal it up in your heart and mind. Your mission will have no herald. Only your works will proclaim you. Thus, it must be, so the lights of the earth can discern he who has the consciousness of Christ from the many who have the consciousness of the ego.

Every great advance in natural knowledge has involved the absolute rejection of authority. Thomas H. Huxley (1825 – 1895)