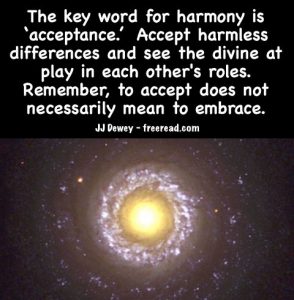 Many problems occur in a group when we expect our view of perfection out of our friends and associates. That just never happens so a first step on the road to harmony is to accept that.

I’ve always liked Joseph Smith statement on this. He said: “if they expected perfection from me, I should expect it from them.”

The second step is to accept that most people out there do not believe as you (the individual) does.

Similar vision is possible through soul contact and similar belief often occurs when two are governed by one strong authority, but when people are allowed to be individuals, and not all have soul contact on all matters, then there will be a diversity of belief.

The solution to this problem is not to get angry at those who think differently than ourselves, but in the word “acceptance.”

There is only one path to oneness (if we exclude the false oneness through the authority of the Beast) and that is through the soul, or Spirit, using Mormon language. If we see ourselves as being in the soul and wish others to be there, then the best we can do is share the light they are willing to receive, give them all the love they are willing to receive and wait for them to go within and discover the truth that is true. If the person never goes within in this lifetime then he may just remain where he is and this must be accepted. There is nothing we can do to force them for the decision and discovery belongs to the individual alone.

On second thought, there is one thing you can do. You can be a loving and wise person to the degree that the student off the path will want to join you on the path and be one with you because of the radiation he feels from you. He may feel that if he does not follow in your footsteps that you may progress along the path to a point where he cannot follow unless he joins you in the soul.

The positive effect given to the seeker through the outreach of love is more forceful than a thousand armies attempting to move him from one place to another.

Almost all the regular posters have either confronted me or disagreed with me on one occasion or the other. If I had gotten angry each time this has happened there would probably be zero members in this group today.

There will be posts where the writer will be nauseated at your favorite writer or guru.

There will be postings where the writer thinks the group is all against him.

There will be postings where the writer dissects another post line by line and refutes it using his best reasoning.

There will be postings where the writer is alarmed at my teachings and thinks I’m leading the group astray.

We must accept all of these differences. That which we should not accept however, is hot tempers and name calling. I would advise the group to ignore a person who seems to be displaying temper and move on. If there is any name-calling I think the group should come down on the guy and let him (or her) know in posts that such a thing is just not acceptable.

If a disturbing individual realizes that his actions are just not acceptable to the group he will either leave or conform. By conform I do not mean think as others do without questioning, but just behave himself in a civilized manner.

Question: What do you think of others who say they are channeling ascended masters or DK?

A lot of people out there claim to channel DK and other masters, but there are several reasons I do not believe any I have read so far.

First and foremost any student of the Bailey writings can tell that these channelings are not the same person or quality of intelligence speaking.

Secondly DK indicated clearly that he wasn’t going to give more teachings to the world until 2025.

Thirdly he has made it clear through Alice A. Bailey he does not speak through regular channeling methods.

I have not seen writings lately that claim to have been given through a Master that were of high enough quality to even be a high disciple speaking.

Question: “So am I reading you correctly here JJ that the life of the teacher is not relevant in comparison to the teachings? It is one thing to put the teacher on a pedestal and worship him, quite another is it not to see the results of his teachings demonstrated in his own life, validating those teachings and setting an example as Christ certainly did?

JJ: I don’t see anyone here worshipping any physical teacher, especially me. Some come close to worshipping channeled spirits.

Where do you get the idea that I would “think the life of the teacher is not relevant in comparison to the teachings?”

Every teacher should attempt to live up to the highest he knows just like the rest of us.

Question: “How come Stalin was not considered an anti-Christ as was Hitler… did he not commit as many if not more atrocities than Hitler, that the world is not even still completely aware of??”

JJ: Stalin was actually more ruthless than Hitler was in many ways. Many of the people he put to death were his own supporters and countrymen.

The difference between Hitler and Stalin was that Hitler was much more intelligent than Stalin and had a plan that could enslave humanity for a thousand years. Stalin had no workable plan. His only interest was glorifying himself.

By the way, I examined Susan’s handwriting for evidence of being a walk-in. The problem is that there is quite a few years between the two samples. I would have to see handwriting a short time before and a short time after a suspected walk-in to speak with reasonable surety.

As it is, even though there are quite a few years between the two samples and they look quite different to the layman about 75% of the characteristics are the same and with the time difference they could have easily been written by he same person – so I can not cite this as evidence of a walk in.