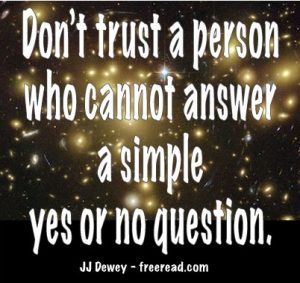 Yes or No, Please

A reader quotes me saying: “The mental person will answer yes or no when a yes or no is specifically requested because he will willing to see where the logic takes him.

“The emotional person will only answer yes or no when the answer agrees with his feelings. If the answer does not agree he will not answer, often resisting if the question is repeated a dozen times.”

Then she responds I do not think that a sure sign of a mental person is that he or she would always answer ‘Yes’ or ‘No’. There is a third option – ‘I don’t know’.

Notice I did not use the word “always” as there are always exceptions. I perhaps should have phrased it as “The mental person will ‘generally’ answer yes or no…”

Reader comment: I think it is more likely that an emotional person would feel constrained to give Yes or No answers because of the need of the lower self to be seen to be certain and an inability of the lower mind to deal with paradox and ambiguity. On the other hand, mental people do not have the same needs and have an innate humility that is more ready to admit a lack of knowledge or certainty.

The emotional person is less inclined because he does not examine his own thoughts and is this often incapable of honestly expressing them. When a definite yes or no is requested to a question to which the basic information is readily available and the person gives a nebulous or evasive answer it is usually because he is avoiding examining his thoughts for emotional reasons because of lower attachments, not because he is free of lower attachments.

In certain teaching circumstances, as with the case of John in my book, the answer may be “yes and no” because the one asking the question would be mislead by a direct yes or no with no additional explanation. For instance, John was asked if the doctrine of reincarnation is true. That would seem to demand a simple yes or no.

From my experience these are the type of escape mechanisms used by emotional types with me when they seek to defend their attachments.

In my dialog with emotionally polarized people on the internet do not recall even one straight answer, but without exception they avoided a “yes” or “no” with a nebulous off-the-subject lecture.

There is no greater proof than experience and experience bears this teaching out with almost 100% accuracy.

So instead of avoiding the answer with distraction techniques, John actually lead to a definite yes or no with further enlightenment. He said that as far as the individual identity having many lives the answer is yes, but as far as the entity being the same personality in each life the answer is no. He pointed out that we have different ray influences in each life causing us to have a different personality in each life. The personality does not reincarnate but the individual essence does. Instead of giving a yes or no to a limited question he expanded the question and gave a definite yes to one and a definite no to the other. The emotional person will very rarely do this, for John’s method is one used by an advanced mind who understands the answer.

A point to call attention to is this. There are many people interested in New Age and metaphysical philosophy, some with great learning, who are not yet polarized on the plane of the mind or higher. I have met many of them who are on a similar level of progression as a typical religious zealot, but just on the opposite side of the belief system. I would guess there are as many mental types who operate a business as their main focus as among metaphysical students. Even so, if a person is mentally polarized and at the same time a student of the Ancient Wisdom he can indeed be of great use to the Brotherhood of Light.

Reader comment: DK says disciples come from every walk of life and represent every point of view. Undoubtedly, this means there is a percentage that display uncertainty with respect to some issues.

I do not believe he specifically said that disciples come from every point of view. If he did then he was technically incorrect.

Do you think there were any disciples who were zealous Nazis, or current believers human trafficking?

Do you think there are any disciples chanting who support tyrants and murderers??”

There are quite a few points of view that true disciples avoid like the plague. The philosophy of the Dark Brotherhood is certainly one of them.

He did correctly say that disciples are to be found in a wide variety of belief systems, but perhaps avoided stating that there are certain illogical views that will be avoided by them.

Now if we speak of aspirants it is true that some of them can be deluded into buying into harmful belief systems.

To take the facts and come to an incorrect conclusion is a sign of emotional polarization or being in transition at best. This can also happen to a mental person but not as often. The difference is that the emotional person will be deceived by his feelings whereas the mental person will make a mistake in putting the pieces of the puzzle together.

Question: Isn’t demanding or expecting people to take a stand or choose a side on issues is a feature of the outgoing 6th ray?

To demand a stand is lower sixth ray, but that is not what we are talking about. We are talking about a request, not a demand. To request information so an issue can be resolved is more Third or Fifth Ray – sometimes even Second Ray.

Question: Aren’t both mental and emotional types uncertain at times?

Uncertainty exists for both emotional and mental types, but for different reasons.

The mental person is uncertain at times because he realizes he does not have all the facts. In this case he must use his power of judgment to come to the best possible conclusion. Because he does not have all the data he realizes he may be wrong and will be open to change. He will also realize that some of his data could be wrong and will calculate the probability of this. If he has only anecdotal evidence then he will give it less credibility than massive evidence. On the other hand, if soul contact affirms a point of view he will trust in it as far as his understanding will allow.

The emotional person will sometimes be uncertain because of a lack of facts, but a greater cause is from having two conflicting emotions.

Taking the war as an example he may have an emotional attachment to “peace at any price” yet also be emotionally involved in human rights and desire to see the oppressed people liberated. In this case the question for him is which emotion will prevail.

Reader comment: Sometimes the logical answer is not the right answer because it does not involve ‘straight knowledge’ or the wisdom of the soul.

Sometimes that which seems the most logical is not the most correct because pieces of the puzzle are missing. Soul contact can take the seeker beyond the facts that can be discovered through normal means and supply the missing information. When this happens then the final conclusion will be seen to be most logical of all. Why? Truth is always logical.

The Star Trek series gave a great example of this. Captain James Kirk was a mental/intuitive for he possessed something that no one else on the Enterprise had to a significant degree. And what is that? What is it that he has that puts him even above Spock? He explained it while in a conversation with Spock in which the two disagreed because Kirk was not being entirely logical. Jim said: “One of the criteria in the selection of a Starship commander is the possession of intuition, and ability to make accurate decisions and come to correct conclusions beyond the ability of the normal powers of logic and reason. I know the choice I am making does not seem logical to you, but when all the facts are in you will then know I am correct.” At this point Spock thought reflectively and seemed satisfied that Kirk had a logical reason for being illogical. Spock had a great admiration for Kirk for he had witnessed the accuracy of his intuition time and time again and even his superhuman Vulcan brain capacity, fantastic reserve of accumulated knowledge, and calculating logic were no match for the intuition of his captain.

Spock basically used his mind to come to this conclusion. “The captain is not being logical, but because his intuition has been proven right and saved our lives so many times then it is logical to conclude his course will prove to be the most logical action when all the facts are in.”

On the other hand, if Kirk did indeed receive an intuitive flash he could see the logic of the matter from the beginning. Higher contact (with rare exceptions) reveals the whole picture of the revelation to the mind.

The first part is true when speaking of dogmatism, but the point of certainty I am presenting has to do with the honesty of knowing ourselves and acknowledging our true thoughts on a matter. Why do we believe what we believe and what do we really believe and think? If we know these things we can usually answer yes or know to simple questions.

Note that the end product of mental application is certainty.

Question: What’s wrong with just saying you do not know?.

Nothing wrong with this. This may be the result of honest mental reflection.

There are many questions to which anything but a yes or no is avoiding the question leading to dishonesty.

For instance a spouse may ask, “Are you having an affair?”

He either is or he is not. If he is guilty and does not want to answer he will respond with great emotion saying something like:

“How dare you think such thoughts. I am disappointed in your lack of trust.”

Let me repeat an interesting yes or no situation I recently asked:

Let us suppose that you and your family lived in a tryanny You have no freedom of speech. You live in fear that on a whim your spouse and children could be raped or tortured and you could be forced to watch. You could be tortured and killed if you do not conform. Your family cannot eat if you do not conform. You have little or no economic hope. You realize you must praise the dear leader at every opportunity or you (and your family) may face torture and death. You even have to be careful of not saying anything negative about him in front of your children for if they let something slip at school your family may face torture.

Before you is a green button and a red button.

If you press the green button then nations will come forth to a war of liberation for your country. Your leader will be disposed of and soon you will have freedom of speech and freedom from fear. The downside is that there is a 10% chance that you or a family member may be injured or killed.

If you press the red button there will be no war and the situation will continue as is.

Which button will you press?

Comment: Some answered the question, some made excuses to not answer.

I would hope that the recent events have brought enough confirmation to our feeling nature that we can all press the obvious button.