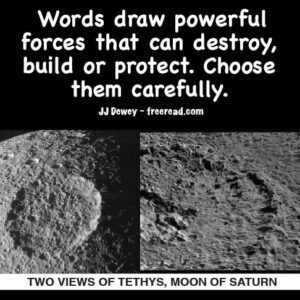 What are Words of Power?

Actually, the truth of the matter is revealed in the phrase itself. A word (or words) of power are words that generate a response. In other words, these words have power to motivate, to initiate, to cause one to build or destroy, to be set in motion or service.

There are several levels of words of power.

[1] The lowest are the advertising slogans that cause the masses to buy a product. “Where’s the beef?” was a famous one. “The pause that refreshes” is another.

[2] Inspiring words that motivate. This category can range from a coach’s lecture at half time to something like a famous quote – to a compliment that inspires a person to try harder or change direction.

[4] Mantras that register with the soul. I qualify this because many mantras which are written are merely composed of fancy words which have no power to create change or action.

The Great Invocation and other mantras are Words of Power and also contain principles.

[5] Special words and sounds which are recognized by devas and higher lives.

[6] The OM and the AUM when sounded correctly.

There are others, but this gives us the general idea.

One of the purposes of the universal religion will be to teach people to recognize and use words of power. Even so, such words have been used in all religions, but not recognized as such.

Name some words of power which have been (or are) used in the Christian religion. How did these words manifest as power or create change?

Do words of power always produce good or do they sometimes produce evil?

Reader Question: Did Jesus and the Disciples use such words to contact the Devas, who are the form builders and female aspect of God? Can anyone learn these words, or are they only passed onto Disciples? Will the World eventually be able to contact the Devas and do stuff with them?

JJ; Jesus used some of the key words, but he was so close to the Spirit that he was able to sense the sounds (both inner and outer) that would cause the devas to respond.

Some words of power are passed on and others are picked up after the disciple gains soul contact.

Question: Can devas only be contacted for higher purposes and to help God’s plan? Can the dark side also contact them through the words of power?

JJ: The Dark Brothers use words of power to manipulate devas toward their own ends. The Brotherhood of Light uses them in service to the whole.

The devas who are on the involutionary arc are like living computer programs that will respond to key words, sounds and signs without regard as to whether they be good or evil.

Question: How would one know when one uses the sacred word correctly? Does something happen when the word is sounded correctly, and if so, what? Does one invoke the soul to a louder degree?

JJ: When it is sounded correctly the disciple tunes into the sound of the sacred word as being made by the soul itself. This tuning in is learned by degrees and the greater the harmony with the soul the greater will be the effect of sounding the word.

Question: Does one have to pray really hard to get a response and keep knocking on that door, or can a prayer be simple and said only once for the higher lives to hear and respond?