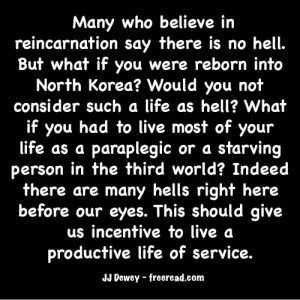 “I took a round-about way of asking this question, but the question that came to my mind was this – given what I was taught about Christ (that during his three days of death, he visited both heaven AND hell) and JJ’s parable about heaven and hell, does this mean that Christ was in a serious state of inDecision, Reluctance or Guilt after his death?

“I was taught that there is an actual Hell (fire and brimstone and what not) and that Christ went to Hell in order to break out a can of Whoop-Ass and go Medieval all over Satan, but that doesn’t seem to fit this new vision of Heaven and Hell as I see it now, through JJ’s parable.”

The parable (from The Immortal, Book I) was meant to teach a principle and is not to be taken literally. However there are such numerous situations that present themselves to souls after they die that it is possible that some people do have a similar occurrence.

There is illusion that is brought back from near death experiences for those who have not escaped astral consciousness will often play our their dreams, fantasies and hidden thoughts on the other side.

The Buddhists may meet Buddha, the Hindus, Krishna and the Christians Jesus, but instead of meeting the real person they will meet a thoughtform or some actor playing a part for their benefit.

Betty Eadie who wrote the famous book “Embraced by the Light,” came back with several illusions. First the idea that Jesus spends a lot of quality time with each and every good guy who passes over.

Some of the teachings she brought back were illusionary such as the idea that we have only one life and then move on to an eternal location as exists in her standard Mormon theology.

Perhaps the greatest illusion is the idea that all go immediately to heaven, even beings as Hitler. This illusion was also promoted in the book Conversations with God.

Some say that Hitler and other bad guys just volunteered to come down and play the bad guy as an act of service. This flies in the face of what Jesus said about Judas, doesn’t it?

Now it is true that Hitler’s higher self is in a heavenly place but in order for the earthly essence of Hitler or some serial killer to be there, a great change would have to take place or his astral self would have to die (sometimes called the second death) and his essence reunited with his soul.

The truth is this. That person which you are the moment you die will carry over to the other worlds so you will be essentially the same person until reunited with the soul. If you are depressed here you will be depressed there. If you get angry easy here, you will continue to do so there while lingering in the astral/etheric plane.

Many illusions do not need a revelation to dispel. Often a little common sense will do.

Is there a hell on the other side?

To answer this one need only ask: Is there a hell for the living on this earth? The answer is yes. When a person in this place decides that life is so bad he wants to kill himself, do you think that such a one is in hell? Of course, he has a terrible state of mind and that state of mind carries over to the other side and is actually intensified and just as his thoughts produced hell for him here they can continue to produce hell over there until he is absorbed by the light of the soul. Then it will be as if he had awakened from a bad dream

People in a similar state of negative thought often join their thoughts together and produce illusionary realities on the other side that are very undesirable places to visit.

If we can learn to forgive others, dispel our negative thoughts and feelings as well as guilt, then we will wind up in a very pleasant place to spend our time between incarnations.

After the Christ left his body on the cross he did descend to those of low vibration and ascended to the highest vibration in the worlds of form and taught and gave hope along the way.

Many misunderstand John’s descriptions of fire and brimstone in the Book of Revelations. Let us examine the Greek here and see what we come up with.

“And I saw heaven opened, and behold a white horse; and he that sat upon him was called Faithful and True, and in righteousness he doth judge and make war. His eyes were as a flame of fire (he sees by the spirit), and on his head were many crowns (he overcame all things); and he had a name written, that no man knew, but he himself (The nature of his mission). And he was clothed with a vesture dipped in blood: and his name is called the Word of God. And the armies which were in heaven followed him upon white horses, clothed in fine linen, white and clean (they are undefiled). And out of his mouth goeth a sharp sword (truth), that with it he should smite the nations (consummate the order of the New Age): and he shall rule (guide)’.’- – them with a rod of iron (the word of truth and wisdom) and he treadeth the winepress of the fierceness and wrath of Almighty God. (Crucified the flesh to free the Spirit). And he had on his vesture (a resurrected body the symbol of the triumph over death) and on his thigh (a symbol of his seed, or those who follow the path of Christ) a name written, KING OF KINGS AND LORD OF LORDS (One who overcomes all things). And I saw an angel (messenger) standing in the sun (has great enlightenment); and he cried with a loud voice to all the fowls (The lights of the earth) that fly in the midst of heaven (they freely explore spiritual mysteries), Come and gather yourselves together (gather and build the cities of Light) unto the supper of the great God (feast on the joy in the kingdom of God); That ye may eat the flesh (destroy the corruption and outworn ideas) of kings (authoritarian rule), and the flesh of captains (turn swords into plowshares and create peace on earth goodwill to men), and the flesh of mighty men (the rich and powerful will be replaced by the wise and enlightened as those who are most respected), and the flesh of horses (instruments of war will be done away with), and of them that sit on them (those who operate them will not be needed), and the flesh (outworn ideas) of all men, both free (those on the path of enlightenment) and bond (those who are imprisoned with selfish desires), both small and great.

“And I saw the beast (Gog), and the kings of the earth, and their armies, gather together to make war against him that sat on the horse, and against his army. And the beast was taken (subdued), and with him the false prophet (those teaching worn out ideas) that wrought miracles before him (impressed the people with their authority), with which he deceived them that had received the mark of the beast (blindly following authority or teachings), and them that worship his image (those who try and find God outside of themselves).

“These both were cast alive into a lake of fire burning with brimstone.” Rev 19:11-20

This last sentence has an interpretation much different than is supposed. Most believe that the lake of fire and brimstone is “hell” which the wicked will enter after death, but notice that the beast and false prophet were not dead when they enter the lake, but “alive.” If they are alive then the lake of fire must be here among the living.

The word “fire” is from the Greek PUR which can be translated as “fire, fiery, or lightening”. The word indicates a display of light and is a symbol of enlightenment.

“Burn” is from KAIO which means “to set on fire”, or “to consume

‘“Brimstone” is an interesting word. It comes from THEION which is the neuter of THEIOS which in turn comes from THEOS.. THEIOS is interpreted as “Godlike” or “divine”, and THEOS is “God

John is telling us that the beast, and the false prophet are to be cast into a situation where they encounter “fire” (enlightened ones) burning with “brimstone” (the God within).

In this situation the beast and the false prophet will eventually be destroyed and Israelites will appear in their place – all the sons of men will eventually become the Sons of God. Remember that Jesus said: “Even so it is not the will of Father which is in heaven, that one of these little ones should perish.” Matt 18:14

Paul also said that God “will have ALL MEN to be saved and to come to a knowledge of the truth.” I Tim 2:4

Those who worship the image of the beast do not seem to believe that God has power to fulfill his will and accomplish this great task. They do not realize that even the representatives of the Beast will come to a knowledge of the truth according to the will of God.