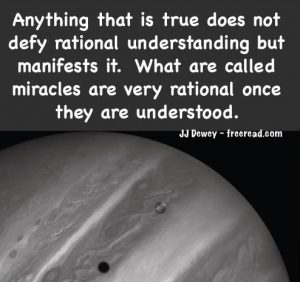 A Course in Miracles & More

Question: Who is the voice in A Course in Miracles?

First let me clarify what mental telepathy is. This is the reception of actual words that form in your mind sent by an entity residing at a distance from your physical space. In Alice A. Bailey’s case DK was in Tibet and Alice was in the United States. By this method the entity never coexists in the same body as the disciple and does not speak through his or her vocal chords. If there is an alteration in the voice then the method is not mental telepathy, but channeling.

Helen Schucman received A Course in Miracles through mental telepathy. Here is a description of it.

“This period of preparation culminated on the evening of October 21, 1965, when the now familiar voice of Jesus said to Helen: “This is a course in miracles, please take notes.” She called Bill immediately, and he reassured her that she was not going mad. He suggested she write down what was being dictated to her, and that he would look at it with her early the following morning at the office. Helen did just that, which is how the scribing of A Course in Miracles began. As Helen later described the experience:

“The Voice made no sound, but seemed to be giving me a kind of rapid, inner dictation which I took down in a shorthand notebook. The writing was never automatic. It could be interrupted at any time and later picked up again. It made obvious use of my educational background, interests and experience, but that was in matters of style rather than content. Certainly the subject matter itself was the last thing I would have expected to write about.”

“The actual process of the scribing was not difficult, and for the most part flowed rather smoothly. Helen would write down Jesus’ words in shorthand notebooks, and whenever she and Bill had time during a very busy schedule, she would dictate to Bill what had been dictated to her. Bill would then type it directly from Helen’s dictation, acting as transcriber. It was truly a collaborative venture between them.”

One thing is certain here. Helen Schucman did not write the book using her own intelligence. Because it was given by real mental telepathy we know it was given by a high entity. The course indicates the transmitter was either Jesus or the Christ.

Now the question is: Because the transmitter was using true telepathy and identified himself as Jesus, does this mean such is the case and we should believe it without question?

No, of course not.

How do we find out then?

Actually that is what we have been talking about before we got sidetracked – how to discover truth.

It doesn’t matter if a revelation claims to be given by the highest methods from the highest god from the highest dimension – each seeker of truth has a personal responsibility to apply all the techniques at his disposal to test the words and eventually reflect then off your souls and see if they ring true.

In reflecting the teachings of the Course (ACIM) off my soul I have had numerous things verified as true. However there are teachings in the book that have not been verified. The interesting thing is that the things that are not verified to me are doctrines that most students of ACIM have completely overlooked.

For instance, the book teaches that when you make the simple decision to leave this world and go home (which is the goal of the course) your body, the world around you, your friends, everything will completely disappear and the eternal unchanging world will appear before you and you will then eternally dwell there, never to be reborn.

The problem is that not even one ACIM student to my knowledge has had this happen to them. All of them are still here with us except those who naturally die and death is not what the course is referring to.

The Course also teaches that the creation of our universe with its billions of galaxies was a tremendous error and needs to be undone. On the other hand, it teaches that God is perfect, yet one way or another all creation came from Him so there seems to be a contradiction here. One may argue that the Son created the Universe and not the Father, but then the Father created the Son and if the Father and Son were perfect they would not go around making gigantic mistakes like creating universes that trap us for billions of years.

Since the book was transmitted by true telepathy this rules out an astral entity. Here are the possibilities:

(1) A Master such as Jesus or the Christ as the book states.

(2) An advanced member of the Dark Brotherhood attempting to distract us from the real purpose of creation.

(3) A Master out of harmony with the Hierarchy wanting to carve out a niche for himself.

(4) The Higher Self of Helen Schucman.

(5) An entity who has decided not to be and has never incarnated. He thinks incarnation is a great error and is trying to convince us to retrace our steps back to a static condition of “being.”

Which is correct? The time for the complete answer is not yet, but contemplating and seeking the truth for yourself is a great exercise in discovery.

Question: Is the Course in Miracles a ‘telepathic’ communication, or a direct visitation?

JJ: The Course in Miracles was telepathy as I said. In a direct visitation you can shake hands with the person and feel his body just as you would your husband and you generally talk to him just as you would with a friend.

If you just see a form you are either seeing a thoughtform projected to you or an astral entity.

Question: What is the difference between telepathy and overshadowing?

Telepathy involves a partial overshadowing, but a complete one goes far beyond that. In the latter case the mind of the disciple and the Master are in complete harmony with the Will of God and as such the minds blend and act as one mind, greater than the sum of the parts.

Question: Could you elaborate on the science of impression?

JJ: Impression is completely formless in its origin and does not work through symbols. Both mental telepathy, the subconscious mind and astral communication can use symbols or actual words. If you can see the outer film of your aura you will see both your own thoughts as well as some external ones reduced to moving symbols and geometric forms.

The closest we can come in regular language to describe impression is the world of ideas. Receiving an impression from a higher life is like receiving an idea. The difference is that with impression a complete understanding is received whereas an idea is the tip of the complete wholeness.

Concerning the Akashic records. The true Akasha is recorded accurately, just as has transpired in history, and if one has the spiritual contact he can accurately retrieve information. The dark bothers, or anyone else for that matter, have no power to change them.

The reflection of Akasha in the astral realm is shifting and changing all the time and the dark brothers can plant readings there to be picked up by psychics.

The true reader of Akasha is very rare. Remember when I gave the group a test? I wrote down a one digit number and had the group try and retrieve it. The number was recorded in Akasha the moment I wrote it down, yet the group made about 17 guesses before someone got it. This illustrates that no one in the Keys group at that time was a verifiable reader of Akasha.

When I speak of continuity of consciousness in receiving revelation I mean that the receiver never steps aside and lets some other consciousness control the physical brain. The disciple using this method never has a period of time that is blocked out by unconsciousness as the information is received.

1 thought on “A Course in Miracles & More”