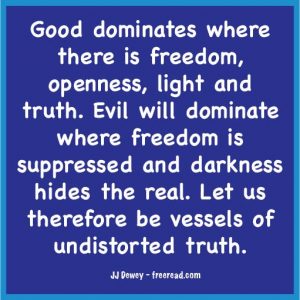 A reader asked about karma as it affects the various kingdoms.

Cause and effect reaches into all kingdoms in all spheres. Even a plant operates under this law but the dynamics of the law as it affects the lower kingdoms are much more subtle as far as karma goes. As far as we are concerned, karma as it affects the human kingdom is of prime importance.

All lives, even Masters, have negative as well as positive karma. This statement may startle some, but first consider this. There cannot be a positive unless a negative is lurking in the background somewhere.

“But,” asks one, “haven’t we learned here that a Master learns to work with the law of cause and effect so karma works in his favor?”

Yes, I have indicated that, but one more thing needs to be considered. When one expands his consciousness and masters karma as it causes painful effects on the human kingdom so that it seems as if one is indeed a Master of producing good effects as we understand the idea – then a new problem is created. This expansion of consciousness that creates the Master also expands his ring-pass-not so new worlds of becoming appear before his eyes. With this comes new challenges and as he moves into these new vistas where he is a beginning student, and no longer the master, he again makes mistakes but on a higher level. These higher mistakes, which are not to be comprehended by the average seeker, create again both positive and negative karma.

Let me quote again from what I believe to be the highest writings on the planet: DK through Alice A. Bailey. Here are some exerpts that clearly tell us that lives above human have to deal with karma. These include lives as high up as the Ancient of Days (Sanat Kumara) and the Solar Logos and beyond.

Here are some quotes from DK:

The whole question depends upon two things, which are the karma of the man, the planetary Logos, and the solar Logos, and the dominance of the spiritual indwelling entity over its vehicle. A Treatise on Cosmic Fire, Page 111

Types of Karma. We might here enumerate the different types of KARMA, even though we have not the time to enlarge upon the subject. A book by itself of vast proportions could not contain all that might be said. We should bear in mind that KARMA is imposed upon the ensouling entity through the medium of matter or of substance itself (which is coloured by it) and that this matter or substance is intelligent material composed of deva essence.

Cosmic Karma-Imposed upon the solar Logos from outside of the system.

Systemic Karma-The working out by the Logos of effects set in motion in previous Kalpas, and which influence His present type of Body.

Planetary Karma-The individual karma of a Heavenly Man, which is just as different from that of another Heavenly Man, as is the karma of the different members of the human family. A Treatise on Cosmic Fire, Page 469

In connection with the karma of the solar Logos, the subject is even more abstract and incomprehensible. A Treatise on Cosmic Fire, Page 801

The relation of the fifth Hierarchy to a certain constellation has also a bearing upon this mystery. This is hidden in the karma of the solar Logos, and concerns His relationship to another solar Logos, and the interplay of force between them in a greater mahakalpa. This is the true “secret of the Dragon,” and it was the dragon-influence or the “serpent energy” which caused the influx of manasic or mind energy into the solar system. Entangled closely with the karma of these two Entities, was that of the lesser cosmic Entity Who is the Life of our planet, the planetary Logos. It was this triple karma which brought in the “serpent religion” and the “Serpents or Dragons of Wisdom” in Lemurian days. A Treatise on Cosmic Fire, Pages 1203-1204

The problem of humanity in respect to imperfection is complicated, not only by the fact that the seven informing vitalising Energies are “tainted with imperfection,” but also by the fact that the Lord of the World is Himself, from the angle of a Solar Logos for instance, far from perfect; this is the reason why our planet, the Earth, is not a sacred planet. We are told that Sanat Kumara is the divine prisoner of this planet, held here until the “last weary pilgrim has found his way home.” This is His heavy karma even whilst it is an expression of His desire and of His joy; the “weary pilgrims” are the atoms (human or otherwise) in His body, and they are tainted with imperfection because of His imperfections; their complete “healing” will set the term for His release. Esoteric Healing, Page 298

JJ: If therefore lives such as the Solar Logos and beyond have to deal with karma then we might as well put the idea of escape from cause and effect out of our minds for at least several eternities.

Actually this goes along well with our current topic.

In my younger days when I used to attend church I heard the idea preached again and again that the world is more wicked than it has ever been in the history of the world. As evidence of this I was told to look around and witness the wars and rumors of wars and man’s inhumanity to man. (Notice girls that the male is blamed for all the inhumanity?). I swallowed this idea without thinking about it until a time came that an alternative view by DK was presented to me. This new idea was that the people on the earth are evolving and getting better as a whole and not worse. This immediately struck a chord with me and after reading it I wondered why I had not considered it before.

For just one comparison consider this. A couple thousand years ago it was national sport to throw Christian men women and children to the lions.. The crowds composed of former neighbors and friends of such Christians cheered the lions on as they tore their victims limb to limb.

Now we give Spain a bad time for bullfighting, but imagine if they reinstituted this ancient spectacle? Why all the nations of the earth including he totalitarian regimes would be abhorred and protest with righteous indignation.

Here in Idaho farmers made national headlines a few years ago when they killed jackrabbits that were causing them problems. Now they had been doing this for many years and no one complained, but when some journalist wrote a national article about it the whole nation began to look upon us as a bunch of animal hating hicks. Just a couple hundred years ago there was not this much outrage over killing a surf or a slave. Now people are becoming as sensitive to the life of a tree as they were the life of a human in the days of Jesus.

We just mentioned that when karma is mastered on one level we then move up to a higher level where we have subtler karmas to work with. The same is applied to good and evil which is closely linked to cause and effect. One of the goals of the higher lives is to not only bring in the greater good of a new age, but to raise the standard of evil so that which was evil in days past (throwing people to lions for sport) becomes unthinkable and a lesser evil (killing jack rabbits) becomes the new definition of the bad behavior.

As we are approaching the new age we tend to go overboard and in some ways we are too sensitive and too politically correct, but after the pendulum swings back and forth a few times we will reach a happy medium in judgment.

Now we could spend many months discussing this Law of Correspondences which has been under discussion, but I believe we have covered it enough to give an idea as to its value in the principles of discovery. We will cover another post or two on it and move on to an entirely new topic, largely out of group need. Nevertheless, this law will come up again and again in these teachings.

Even though there are more principles of discovery to cover I am impressed to move on to talk about the principles of good health and then finish this topic at a later time.

A number of people in the group have health problems and my heart goes out to them. It is also of extreme importance that those of us seeking to serve, who presently have good health, maintain this vitality, for poor health is indeed a great handicap to many.

We could spend years on this subject, but the class goal at present is to cover the most important and useful information..

Wholeness (holiness) in health covers many areas including the physical, emotional mental and spiritual.

Let us start with the physical and move up.